A whole new batch of films are being unveiled on Netflix in early April. Of the new U.S. region arrivals, here are the ones I’m most excited to watch.

These movies are bad. But they are the kind of movie train-wreck that I love to watch. Warwick Davis reprises his role as the murderous title character. He quips and one-lines his way through killings in the worst locations possible: Las Vegas, Space, and The Hood (again). If you like so-bad-they’re-good horror movies, this franchise is for you.

These three Lerprechaun sequels are on Netflix April 1.

An indie horror thriller about an actress trying to rise to fame in Hollywood, and willing to do it at any costs. This audition, however, may be too much for her to bear.

The trailer for this film makes it look like a low-budget, under the radar horror gem. I’ll be waiting to see if the movie lives up to the expectations on April 3 when it rolls onto Netflix.

A less promising horror movie, but still one that I would be interested in watching, The Quiet Ones follows a 1972 experiment on a woman who may are may not be possessed by a poltergeist.

The film stars Jared Harris and is loosely based on the real-life Philip experiment (an experiment which is largely discredited for its lack of controls and possible fraud). It may not bring anything novel or exciting to the horror genre, but I’m a horror nerd who will likely watch this regardless of its quality.

The Quiet Ones arrives on Netflix on April 3.

This zany mythology of a show stars Elijah Wood as a man who sees his neighbors dog Wilfred (Jason Gann, who plays the same eponymous character in the original Australian version of the show) as a man in a dog costume. Although I found it to overstay its welcome narrative-wise, I never got a chance to finish the series. Now’s my chance, and yours too if you’ve never seen the show.

Season 4 drops on Netflix on April 7.

A young girl witnesses an abrupt act of violence perpetrated by her neighbor over an accusation of rape. An indie drama starring Tim Roth and Cillian Murphy, this film looks hit or miss in the trailer, but I can’t ignore the casting choices (Shakespearean actor Rory Kinnear also stars).

Netflix originals have fared pretty well. I know very little about this project, but I am excited to see what direction it goes in, particularly because it is developed by Cabin in the Woods director Drew Goddard.

Marvel’s Daredevil premieres its first season on Netflix on April 10.

I’ve already discussed this film somewhat at length on this site (here and here), but if you haven’t seen it this is your chance. Possibly the best horror film of 2014, The Babadook is an Australian indie that tackles depression personified as a children’s book monster.

The Babadook comes to Netflix April 14. 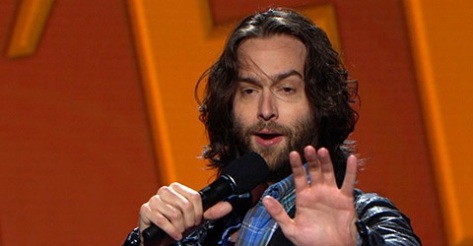 The man’s comedy might not be for everyone, but I am a fan of D’Elia’s manic delivery and even his somewhat done-to-death characters. D’Elia has also acted on sitcoms such as Whitney and Undateable, so if you enjoy him on those shows, chances are you’ll like his stand-up. There are also plenty of Laugh Factory clips online of some of his more popular bits, so if you need more convincing go check those out.

David Wain’s off-the-wall spoof of romantic comedies is kind of brilliant. He points a finger at the absurdities and conveniences of romantic movie plots and exaggerates them to hilarious effect. The film also stars comedy giants Amy Poehler and Paul Rudd. In short, there’s no reason not to see this movie when it drops on Netflix on April 17.

I have already reviewed this movie in full, so if you want more convincing as to why you should watch this movie when it comes to Netflix on April 21, go check it out here. The skinny of it, though, is that it is a beautifully shot movie with a strange and original blending of genre that is definitely worth a watch.

As always, thanks for reading, and happy Netflixing!

Got a good Netflix recommendation? Know of any new releases that I missed in my list? Let me know in the comments!

Note: Titles and Netflix release dates courtesy of bestmoviesonnetflix.com. Go check them out for even more new Netflix releases, as well as titles that will be leaving Netflix come April 1.