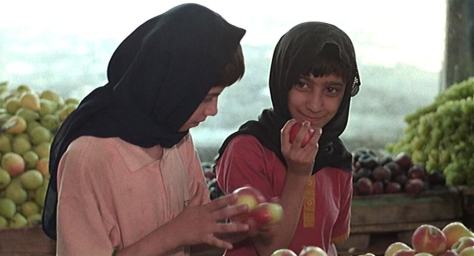 Language plays a crucial role in social and childhood development, as well as in the narrative unfolding of The Apple. Yet, Makhmalbaf does not feel it does justice to the importance we hold in certain things. In her interview with The Guardian she states: “When I think of something that feels important to me, I find when I say it out loud it is not important. It is nothing. If I put my important thing into words, I have somehow spoiled it.”

There is an irony to this statement that is striking, perhaps even profound. The detriment of the upbringings of the Naderi children and Genie is that they have been closed off from the world, and, as a result, their social literacy is negatively impacted. Developing past the critical period of language acquisition without adequate education, these children have limited to no conversational skills. Genie never fully grasped the English language, even after years of education.

What The Apple shows, however, is the beauty of the absence of language. Long takes unfold without the Naderi children speaking a word, yet their wonderment of the world outside is evident in their faces and actions. Looking into the sun or a mirror, clanking spoons on the bars of their door, and jumping for an apple that bounces on the end of a string yields poetic filmic images that would only be burdened by scripted speech. Despite the necessity of the spoken word in society, it comes up short in moments that truly resonate.

In a way, this is the most beautiful aspect of The Apple, where these moments cannot really be broken down into an overtly meaningful textual analysis, and if they can be I would argue that they should not be. One could speculate on the symbolic nature of the apple as it delights the Naderi children and aids in the haunting emotional breakdown of their mother in the film’s final moments, but putting textual meaning to the visual image is to dilute the beauty of the image itself.

Of course, this analysis can lead to the slippery slope in which this very article is hypocritically going against this very sentiment by providing a textual analysis of a film specifically adhering to an aesthetic that discourages it. But engaging with that idea is to argue the relevancy of a meta-textual article analyzing a meta-textual element of a meta-textual film, and that rabbit hole may prove too deep for my blood.

Still, I feel it relevant to engage with Makhmalbaf’s conflicting idea. How do we measure importance? If not with words, how can we possibly socialize the beautiful things that really matter in life? It is an impossibly complex question that I could never hope to answer, but one that I find deeply meaningful in a world inextricably linked to the written and spoken word being used to convey meaning.

Makhmalbaf’s The Apple is a multi-layered and complex film, while also poetic in its moments of simplicity. For every ethical quandary it stirs up in the viewer, it gives more in the way of the inexpressible beauty of freedom. This leads to a precarious tonal balance between heartbreak and lightness, a tightrope the viewer walks throughout the 86-minute runtime so that we leave the film exhausted, exhilarated, and with the lofty task of climbing back down to the ground from that high-altitude mental place. Perhaps I hyperbolize, but, as with the beautiful things in life, they speak for themselves.