At the beginning of Season Five of House of Cards, President Frank Underwood (Kevin Spacey) takes over Congress, literally stepping in where he is not allowed. Because abuse of power in the House of Cards war is only met with slight perturbation. 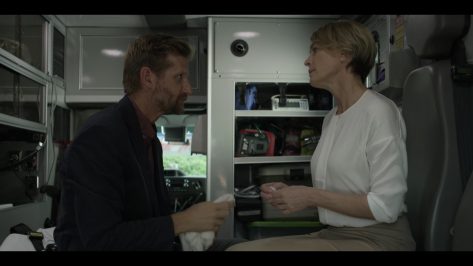 With the repetition of “I will not yield,” the ultimate rallying cry of Frank Underwood’s slimy political persona, the President demands that Congress make a formal declaration of war against ICO (the show’s version of ISIS) and leave political squabbling over his own merits as a leader by the wayside.

Later in the day, the Underwoods attend the funeral of the hostage killed by ICO. An incident there involving the daughter of the victim publicly shaming Frank for killing her father, and subsequently whispering in his ear that she wishes him dead so that his wife Claire Underwood (Robin Wright) can become president, adds to Frank’s fiery public persona leading up to election day.

Tom Hammerschmidt (Boris McGiver) remains adamant to bring down the Underwoods for the corruption that they have perpetrated, appearing on a talk show with Claire decrying the President’s attempt to stir Congress to war as a smoke and mirrors act to cover up his own crimes.

On the other side of the election, Republican candidate Will Conway (Joel Kinnaman) is hurting from online comments made by his wife Hannah (Dominique McElligott) in which she sympathizes with the mother of one of the ICO terrorists, a move that the Underwoods look to exploit.

The season five premiere of House of Cards is business as usual. The Underwoods continue their same old dastardly tricks, this time in a United States climate afraid for their safety. The episode ends with Underwood, with his usual brand of merciless snarl, disposing of the home-grown ICO terrorist (quite illegally, no surprise there).

The episode is as compelling as a late series premiere is expected to be. The show has worked itself into a groove where most things that happen within the crooked world of the show feel commonplace. It is hard to be shocked like we were in season one to see a climbing Frank Underwood kill to get where he wants to be. Now everything he does has a silly layer of absurdism over the top of it.

There is something more compelling about Claire Underwood, her character rising up over the seasons to be more important and three dimensional than the show’s figurehead. It would be more interesting to see her become the sole lead of the show. And hey, that may happen. That is one of the only surprises the show has left to pull the trigger on.