Nine weeks after the botched election, there is still no president-elect. By the 12th amendment, Congress will select the president and vice president. Frank Underwood (Kevin Spacey) is prepared for it. In fact, he devised the snafu that allowed America to get to this point. Now he just has to do what he does best: manipulate the spineless miscreants of American politics. 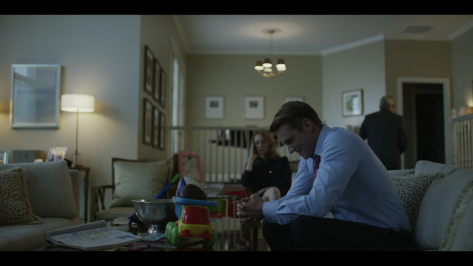 With everything in flux, every character is dealing with a new set of problems. Claire Underwood (Robin Wright), now contesting for her own VP ticket, has to meet with Congresspeople to convince them to vote for her. She also has to come to terms with the possibility of VP-ing under a President Conway (Joel Kinnaman).

Conway himself is grappling with the fact that he had the presidency in his hand before it was ripped away from him by the political kerfuffle.

This episode illustrates what is a struggle for House of Cards. The political intrigue that they are able to concoct is consistently satisfying. But the relationships and off-kilter sexuality that the show presents never feels right.

In this episode we get more from Stamper and his covert affair and further complications between Claire and writer Thomas Yates (Paul Sparks). Neither arcs are particularly compelling, merely filling space so that the political narratives can pace correctly.

The political game afoot is indeed compelling. It hearkens back to early seasons of the show, where Frank has to punch up to get what he wants.

This episode does feel like the classic House of Cards formula. Stamper is crawling around in the weeds, now accompanied by Leann Harvey (Neve Campbell), who has troubles of her own not dislike Stamper’s problems with Rachel Posner (Rachel Brosnahan) in early seasons. Claire and Frank are fighting for survival from a point of weakness. The pieces are all working correctly.

Let’s hope it keeps up this way.