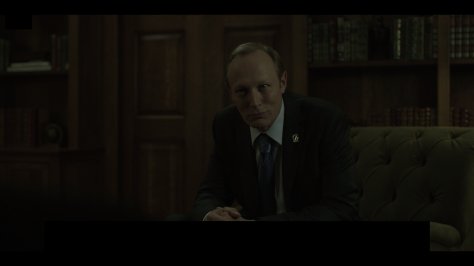 Meanwhile, Doug Stamper (Michael Kelly) makes moves in order to raise Frank Underwood’s (Kevin Spacey) position on the liver donor list. This means letting a man die, something the loyal Stamper would likely do with his bare hands if possible. However, it is likely to become another ethical question mark on the Frank Underwood legacy.

Frank’s hallucinations continue to manifest themselves, and with them comes a glimpse of his lascivious past in the form of deceased reporter Zoe Barnes (Kate Mara) and Peter Russo (Corey Stoll). A strange scene, it unfolds with imagery reminiscent of previous episodes. In reality, this subconscious resurfacing leads to a seizure.

As Frank gets prepped for surgery, Heather Dunbar (Elizabeth Marvel) gets prepped to be questioned by the Department of Justice and Claire attends the G7 summit in Germany in attempts to save foreign relations between both China and Russia.

During Dunbar’s questioning, she admits to meeting with Lucas Goodwin (Sebastian Arcelus) prior to his assassination attempt, but uses the admission as a political attack on Frank and his campaign staff. This doubling down appears to the press as political suicide.

Claire’s attempts to strong-arm Petrov results in a deal. As she chooses the deal over speaking with her husband, she makes a definitive move toward her new future as a politician. Even with the Underwoods moment of reconciliation at the end of the episode, it feels clear that Claire has made her choice.

This episode ends what was essentially just a minor diversion for Frank Underwood. Awake and with a new liver, Frank is now ready to be the presidential frontrunner. The episode feels like a bridge episode, moving plots forward so more major events can occur in the back half of the season. This leaves the hour feeling stagnant, albeit necessary.