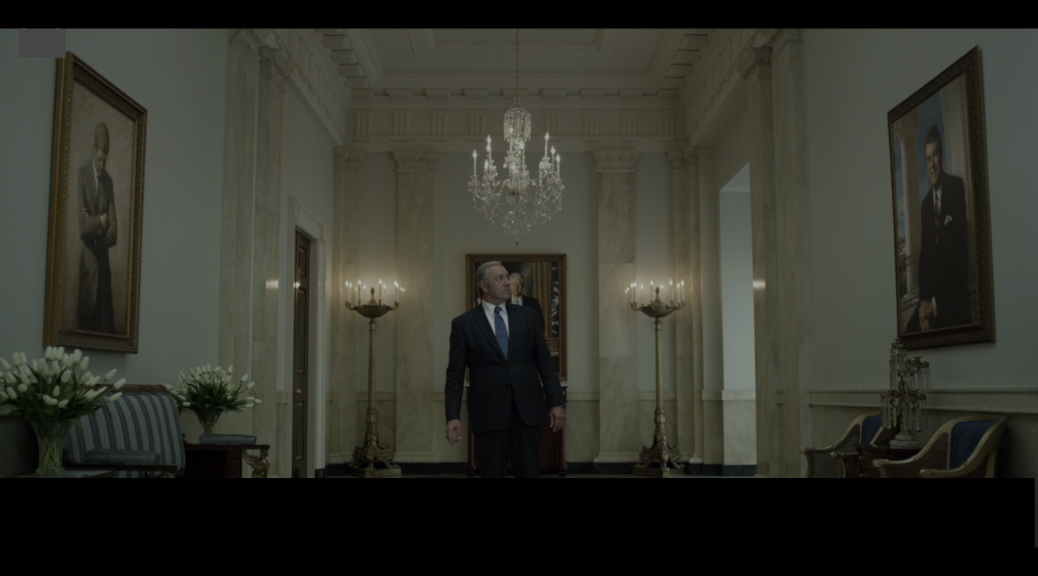 Season four, episode seven of House of Cards begins with Heather Dunbar (Elizabeth Marvel) dropping out of the presidential race. Though, I suspect this isn’t the last we’ll see of Dunbar, who knows something is amiss with Frank’s rise to power. 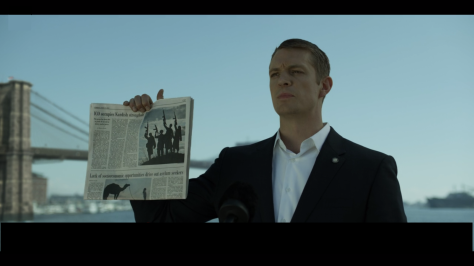 A terrorist organization named ICO (not dissimilar to ISIS in nature) is becoming an increasing military threat, leaving President Frank Underwood (Kevin Spacey) with a choice of whether or not to launch airstrikes on the organization.

Claire Underwood (Robert Wright), now having an unsteady alliance with Frank, is tackling political issues of her own, namely gun control in the face of the assassination attempt on Frank’s life.

Frank extends an offer to Donald Blythe (Reed Birney) to be his running mate and continue his career as Vice President, an offer that Blythe declines. An offer that Frank’s entire cabinet disagrees with in spite of his assertion that he is the best candidate.

Frank’s campaign manager Leann Harvey (Neve Campbell) suggests to Frank that his only way of beating Republican contender Gov. Will Conway (Joel Kinnaman) is to tap into her data analyst source and Pollyhop, essentially engaging in domestic surveillance in order to secure votes. Conway himself is avoiding the topic of Pollyhop, but Frank is ready to consider using the NSA to one-up the young hotshot politician.

Unlike Dunbar, Conway is willing to play the game and play it dirty, just like Frank. What he doesn’t know is the lengths by which Frank is willing to cripple his political career.

This episode gives us great scenes between Claire and Frank, acting like the monster political unit that they used to be. These cross-cutting scenes are wonderfully paced and edited. We see fast conversations about VP and the gun bill be used for character intrigue.

As fascinating as the politics of the episode are, the plot arcs being juggled this season don’t move ahead very much. We get brief glimpses of the Lucas Goodwin (Sebastian Arcelus) backlash. But mostly we get the establishment of Conway’s character, who has only really been mentioned in passing earlier in the season.

The season is also starting to get into more topical political issues, bringing in issues of terrorism, gun control, and meta-data surveillance. This episode in particular seems to abandon the narrative intrigue from previous episodes in order to plant the seeds for more topical plot threads. Whether this trend will continue to affect the plot moving forward in the season is uncertain, but this episode is clearly a turn from the first half of the season. 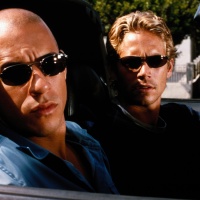 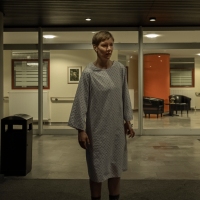