Space Force, the new comedy series from Steve Carrell and Greg Daniels, is the second television show with inaugural seasons in 2020 to feature a fictionalized space program run by professionals whose expertise range from semi-competent to entirely incompetent. The Armando Iannucci-created Avenue 5 deals in, with a farcical flavor, the struggle to maintain civil stability when people are essentially stripped of civil society and placed in an insulated environment. 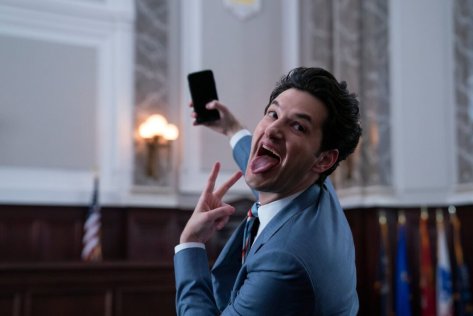 Space Force, on the other hand, is about a fictionalized version of America’s Space Force (the President wants “boots on the moon”). Newly promoted four-star General Mark Naird (Carrell) is appointed to head Space Force, and he soon learns of all the colorful personalities making life difficult in the government branch. Its farce is more concerned with broad strokes political parody and the breakdown of bureaucratic chains of command.

Comparatively, Avenue 5 does more careful work developing its characters and is more poignant in the execution of its comedy—albeit, Avenue 5 has its own shortcomings when viewed against the bulk of Iannucci’s work. All the same, Space Force is a worthwhile new sitcom with room to grow.

The show’s overly telegraphed political signifiers are one thing—there is a uni-dimensional stand-in for Alexandria Ocasio-Cortez, and the unseen presence of POTUS looms large over Gen. Naird. The show succeeds more when it relies on the charisma of its ensemble cast. The comedic batting average may not be at all-star levels on the writing front, but the roster shows depth.

That said, the show lacks storytelling cohesion. The plot moves at fits and starts. Certain arcs are fast-tracked to fit into a 10-episode season, such as Naird’s pilot Captain Angela Ali (Tawny Newsome) applying to become an astronaut. Given that whole episodes are dedicated to throwaway subplots, it is a shame to see character development truncated.

Space Force peaks early with an episode climaxing in a congressional hearing over the defense budget. It then stagnates for a handful of episodes, plateauing most severely with an episode about a contrived game of war between Space Force and the Air Force, a game which eats up screentime and whose undefined rule set makes it particularly uncompelling. Subsequent episodes find largely arbitrary reasons to pair different members of the recurring cast together, pairings made to create relationships and build the series’ characters. In practice, these single episode arcs do little to activate these characters, who are otherwise well-performed by comedic talent such as Ben Schwartz, Tawny Newsome, and Jimmy O. Yang.

In this sense, the plot’s focus on Carrell is detracting. However, one gets used to his gravelly delivery and character quirk of singing under his breath to relieve tension. If one cannot do that, they at least have Malkovich as a hearty alternative, whose endlessly sardonic character is always engaging. If nothing else, Don Lake gets an insane amount of comedic mileage out of his submissive one-star general character.

The largely stagnant second half of the season comes to a precipitous turn in the final episode. The season’s climax reaches near incomprehensibility in its depiction of a wild coup, military aggression, and familial strife. It is a truly thudding end to an already turbulent five hours of comedy, leading to a cliffhanger ending that doesn’t so much intrigue as it does baffle.

For all of its narrative issues, the show looks great. A gaggle of filmmakers that include Dee Rees (Mudbound) and Paul King (Paddington) direct the heck out of what is ostensibly a handful of sets and a couple of high production value set pieces. And, to be fair, first season character issues are common in comedy shows. With the visual capabilities this high and the pool of comedy talent this deep, Space Force has a high ceiling. Season one just fails to illustrate this full potential.