The cold open of House of Cards episode five is yet another nightmarish vision from Frank Underwood (Kevin Spacey), this time depicting a Confederate Civil War soldier shooting him in his hospital bed. The assassination attempt on his life may prove to be politically beneficial, but this scene shows that it will only help in heightening his already troubled mind.

Frank’s Chief of Staff Doug Stamper (Michael Kelly), now returning to the forefront of the show, is working furiously to END_OF_DOCUMENT_TOKEN_TO_BE_REPLACED

Frank Underwood (Kevin Spacey) may have to run with his wife Claire (Robin Wright) as his running mate, or risk further sabotage from her and Leann Harvey (Neve Campbell). He and Doug Stamper (Michael Kelly) search for a different way to satisfy Claire’s political desires while also investigating the leak of a racially sensitive image to the press. Stamper heavily suspects Seth Grayson (Derek Cecil), whom we already know leaked the photo of Frank with a Confederate Civil War re-enacter. 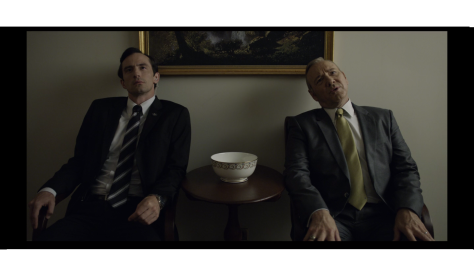 The third episode of the new season of House of Cards shows the continued efforts of Frank Underwood (Kevin Spacey) to salvage his struggling presidential campaign. Returning to his hometown of Gaffney, South Carolina, he speaks in a church. The scene is great, cross-cutting between the speech itself and Underwood preparing for the speech. The lighting contrast and his mumbling recitation show the reality of his feelings for the people that he is claiming to be working for, that they are merely votes that he desperately needs. 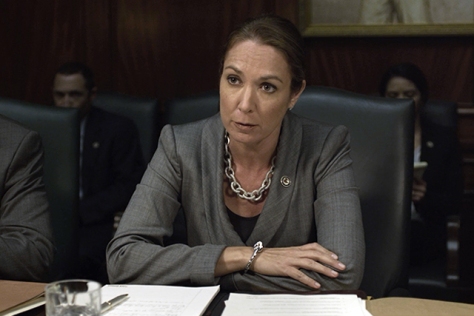 On the other end of the political totem pole, Lucas Goodwin (Sebastian Arcelus), aka John Carlyle, is working on parole, cleaning cars. In order to secure a car, he engages in sexual favors with a co-worker. He uses this to END_OF_DOCUMENT_TOKEN_TO_BE_REPLACED

Episode two of House of Cards season four opens on a conversation between Claire Underwood’s mother Elizabeth (Ellen Burstyn) and a group of her perhaps monetarily influential friends. She encourages endorsement of Heather Dunbar (Elizabeth Marvel) for president so that her daughter may begin her own political rise once Frank Underwood (Kevin Spacey) is out of the oval office.

The episode re-introduces Russian President Viktor Petrov (Lars Mikkelsen), where a man fleeing Russia seeks asylum in the U.S., fearing for his life when an attempt to unseat Petrov goes south. To President Underwood, this appears like END_OF_DOCUMENT_TOKEN_TO_BE_REPLACED 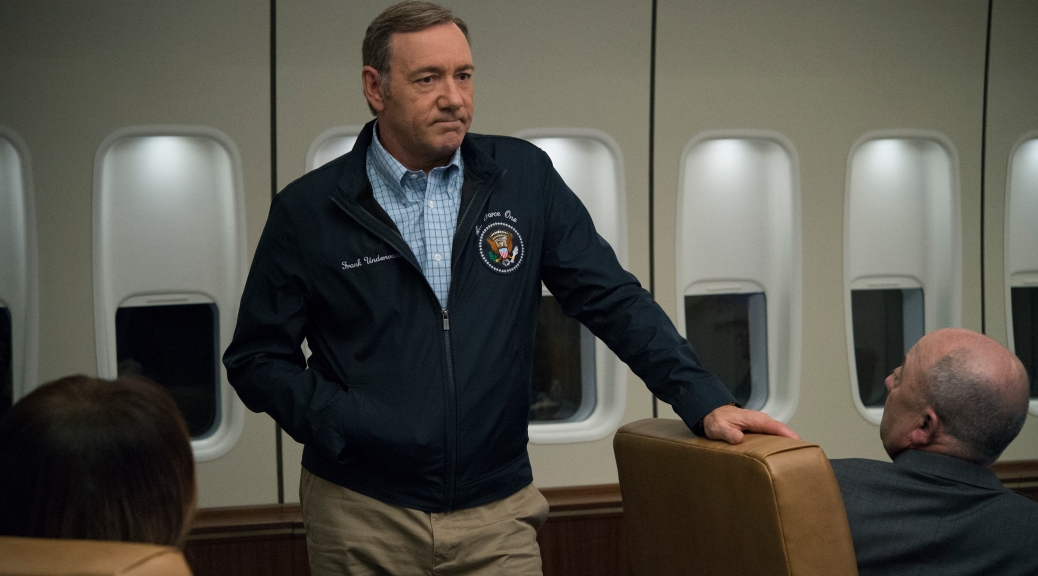 Caution: Spoilers for House of Cards season four, episode one (and perhaps any previous episode of the show) ahead.

Season four of House of Cards opens on a strange yet perversely poetic image: former Washington Herald senior journalist Lucas Goodwin (Sebastian Arcelus) glibly reciting erotica so his prison cellmate can get off on the bunk below him. Goodwin was previously framed by hacker Gavin Orsay (Jimmi Simpson) and Frank Underwood (Kevin Spacey) loyalist Doug Stamper (Michael Kelly) in order to prevent further suspicion over the death of Zoe Barnes (Kate Mara) at Underwood’s hands.

The reason for Goodwin’s lewd helping hand becomes clear later on, when it is revealed that he END_OF_DOCUMENT_TOKEN_TO_BE_REPLACED