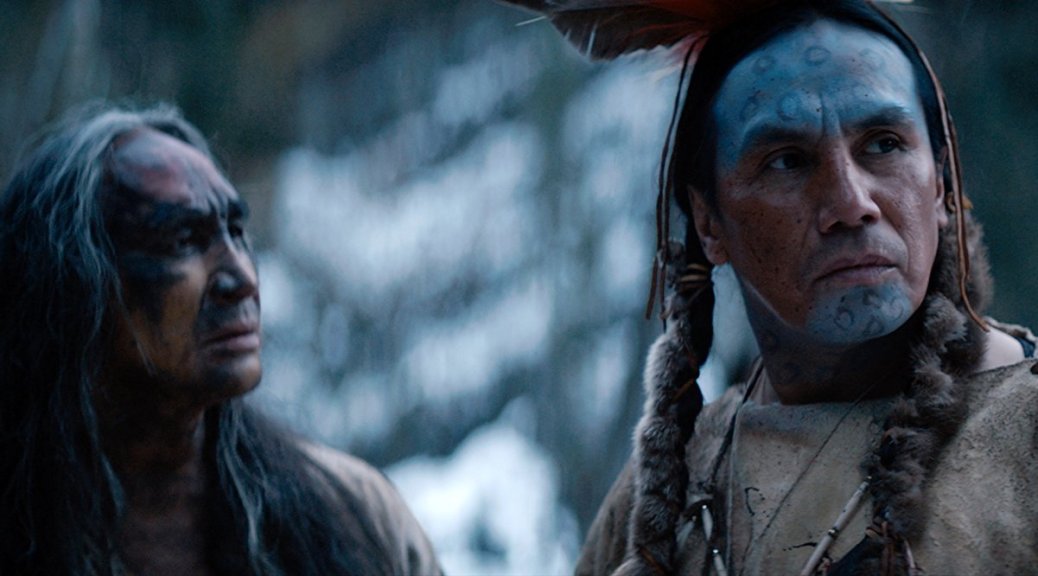 Sean Meehan’s Lost Face is a short film adapted from the Jack London short story of the same name. It is the story of a group of fur traders who are captured and tortured by the Native Americans who were enslaved into building their trading post.

What first we see in Meehan’s film is the visceral stabbing of one of the only remaining traders. The tribe and the only other trader left alive, Subienkow (Martin Dubreuil), look on as the tortured man struggles against the knife.

London’s story is one of deceit and its ramifications. Subienkow, who has just watched his entire caravan of traders tortured and killed, knows he is going to die. He quickly conjures up a con, promising to the tribe chief Makamuk (Gerald Auger), in exchange for his safe release, a medicine that can withstand the force of a blade when rubbed on the skin.

Meehan’s short paces like the London story, holding on to the core of the story while leaving the adequate ambiguity of the end result. Makamuk’s transformation, in terms of the shifting respect that his tribe has for him, is left dangling at the end of the film. It doesn’t puncture with the same severity of London’s words: “He knew that thenceforth he would be no longer known as Makamuk. He would be Lost Face; the record of his shame would be with him until he died.” The ending of the short film, instead, functions more as a lilting ellipsis, with Makamuk’s departure into the snow ultimately less gripping than what words can do.

All the same, Lost Face is a functional adaptation of the short story. Shot in gray-blue hues to match the bleak and gritty nature of Subienkow’s final hours, the mood is properly established. And the simplicity of the narrative scope maps onto a short film template very well, at least in the way that Meehan envisions it.

In terms of this simplicity, it is also the biggest shortcoming of Lost Face. The acting from the two major figures—Gerald Auger and Martin Dubreuil—is all well and good, but the characters they play are more of a function for the clever rouse than interesting characters. The biggest moment of character development happens after the film is over, to be frank.

Lost Face captures its environment wonderfully and utilizes the Jack London source material to make for a plot that keeps you invested until the final axe drops. By the same measure, it never develops itself to a place where it is worthy of individual analysis (i.e. it fails to set itself aesthetically apart from where it came from). While this is not required of an adaptation for it to be successful, there is something lacking in character here that makes it feel flatter than the short story.