The “Roadshow” 70mm exhibition of Quentin Tarantino’s eighth film, The Hateful Eight, begins with a three minute overture. It is a haunting piano, string, and xylophone melody that plays over a red splash screen. This overture, and the films full score, are handled by master film composer Ennio Morricone. 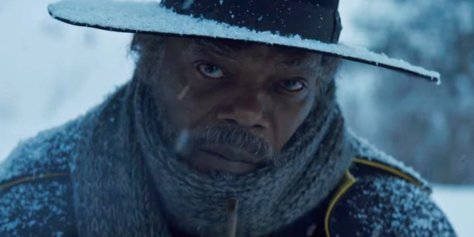 Morricone’s career spans decades, and his work has included iconic scores in Sergio Leone Westerns. It is thus apropos that he tackles this films soundtrack, which is at times the dominant attraction, crescendoing into Hellish tremolos from thunderous strings. It is a brilliant score that mixes Western and Gothic motifs.

Tarantino begins The Hateful Eight by showing off his 70mm excursion via extreme long landscape shots. He lingers on the white world of the post-Civil War West before jumping into the diegesis of the film.

The movie revolves around a callous bounty hunter John “The Hangman” Ruth (Kurt Russell) bringing in a female murderer (Jennifer Jason Leigh) to the town of Red Rock to hang. However, a blizzard forces them to stop short of town and bunk up at Minnie’s Haberdashery, where they meet various others.

The usual suspects are to blame for The Hateful Eight‘s success. Tarantino’s vision and deft scripting allows for colorful character with colorful pasts. The acting ensemble steps up to fill these roles wonderfully.

There isn’t a dud performance in the eponymous bunch. Kurt Russell dons a gruff, no frills persona with hints of John Wayne for good measure.

Samuel L Jackson is his usual charismatic self, giving some of his best acting work since his first collaboration with Tarantino.

Jennifer Jason Leigh perfects nonverbal communication, delivering some of the best moments in the film with no dialogue at all.

Demian Bichir gives his character a strange whimsy that adds a fun layer to an otherwise static character.

Tim Roth is delightfully giddy as the town’s hangman, thankfully returning to a Tarantino film after far too long. The entire cast is noteworthy, save for a small appearance from Channing Tatum, who feels out of place in the film.

The Hateful Eight features Tarantino’s usual style of blending genre lines. Western elements exist throughout the film, but the film is not a Western by design. At one point, it become more akin to Clue than your classic Western tale.

The Hateful Eight is one of the most beautiful-looking films of the year. Tarantino makes grand use of his extended aspect ratio to highlight the breadth and depth of the snowy landscapes outside and the deliberate staging and mise-en-scene inside.

The film is not without its faults. Some minor technical choices (use of slow-mo and voiceover) were more of a distraction than an amplifier. But overall the film is another strong addition to the Tarantino oeuvre.

For a three hour film, The Hateful Eight moves. Tarantino is a master of pacing, mostly due to the attention that he places on dialogue. If anyone can keep my attention for three hours, it is Tarantino.

Have you seen The Hateful Eight? If so, what did you think? Let me know in the comments!