In a rural forest, the snap of a rifle shot breaks the quaint silence. Two brothers (Fidel Badran and Jad Badran) stand over their unseen prey, taking a beat before they go about covering their tracks so their father does not realize what they have done with his hunting rifle. 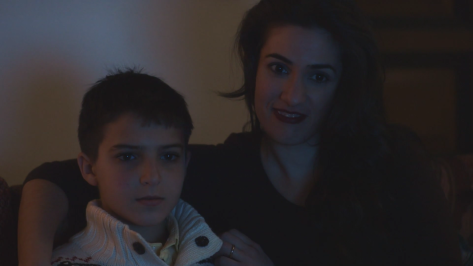 The Rifle, The Jackal, The Wolf and The Boy is the familiar feeling of childhood guilt ratcheted up to grim stakes. The narrative itself is almost absurdly simplistic, and the film chooses to rely instead on its visual and sonic design to create a mood.

The sound design is the best technical aspect of the film. It is rich and expertly mixed, to the point where something as mundane as a thunderstorm sounds dynamic. The soundtrack is mainly silence, but when that silence is interrupted there is a noticeable impact to it.

Visually, the film emphasizes the extreme long shot. While often picturesque, the multiple landscape shots become less purposeful the more often repeated. The most powerful images within the narrative are comprised of juxtapositions of closeups and long shots. The streak of blood in the leaves at the onset of the film is paralleled later by a long shot that also yields blood.

Perhaps the most meaningful image in the entire film comes in an extreme long shot that depicts the two brothers and their father looking on at what the brothers shot. It takes the familiar and somewhat obvious themes of family and nature-versus-man and encapsulates them into a striking visual.

While technically spectacular, the plot does not quite live up to the same potential. The ramifications of a child’s actions leads to a strong conclusion, but the path there does not allow for much else. The characters are left static. The themes have been done before. There is something missing within the development that could have allowed for a more tangible experience.

The Rifle, The Jackal, The Wolf and The Boy is one of 10 live action short films currently shortlisted for the 2017 Academy Award nominations. The shortlist is as follows:

The Oscar nominations will be announced January 24, 2017.