Tell Me Sweet Something follows young author Moratiwa (Nomzamo Mbatha) through the trials of artistry and romance.

Mbatha holds down the fort at the head of the film well. Her character the most well-rounded of the lot, she is given a lot more to work with. But, all the same, she embodies the character well. 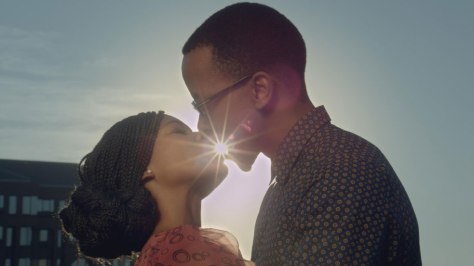 Fulfilling the obligatory role of comedic relief male sidekick is Thomas Gumede as Gordon. Albeit a tired character, Gumede makes it work, becoming the comedic standout of the entire film as the helplessly womanizing best friend of a male model.

Maps Maponyane, who plays Nat, our protagonist’s main love interest in the reluctant romance plot of the film, is a bit more rough around the edges, but he has his moments. His acting wavers during moments of emotional intensity, but he plays the more casual scenes with an awkward charisma that fits the character well.

The narrative of Tell Me Sweet Something is, for the most part, by the book. Moratiwa is reluctant to have any romantic involvement with Nat given how different their lives appear, and Nat works to woo her throughout the first half of the film.

What is perhaps the better plot of the film is the subplot involving the romantic entanglement of one of Moratiwa’s friends. Again, it is a conventional love triangle, but it is almost more compelling than the main story that we follow for most of the film.

By and away the best (and most original) aspect of the film is how it breaks from the diegetic narrative to feature interviews with real-life married couples. What this does for the film is add honest depictions of love on top of the romance narrative we’ve all seen countless times before.

On a smaller level, the film is interspersed with montage sequences that are edited strangely. A fashion show in a bookstore is edited where it feels like whole chunks of the scene were left on the cutting room floor, which leaves elliptical gaps between cuts that are jarring. A dance club montage later in the film focuses on extras , giving them multiple close-ups, perhaps to cover up the sparseness of the space. These minor technical choices are indeed minor, but they still stand out.

In the end, Tell Me Sweet Something is a conventional romantic film. The plot revolves around the sentimentality that comes with the idea of “changing” for another person. But, when it doesn’t get bogged down in melodrama, it is a film with enjoyable characters and solid acting performances.

Also, as a final note, the film’s soundtrack is really enjoyable. It’s dynamic, diverse, and fits the scenes well.