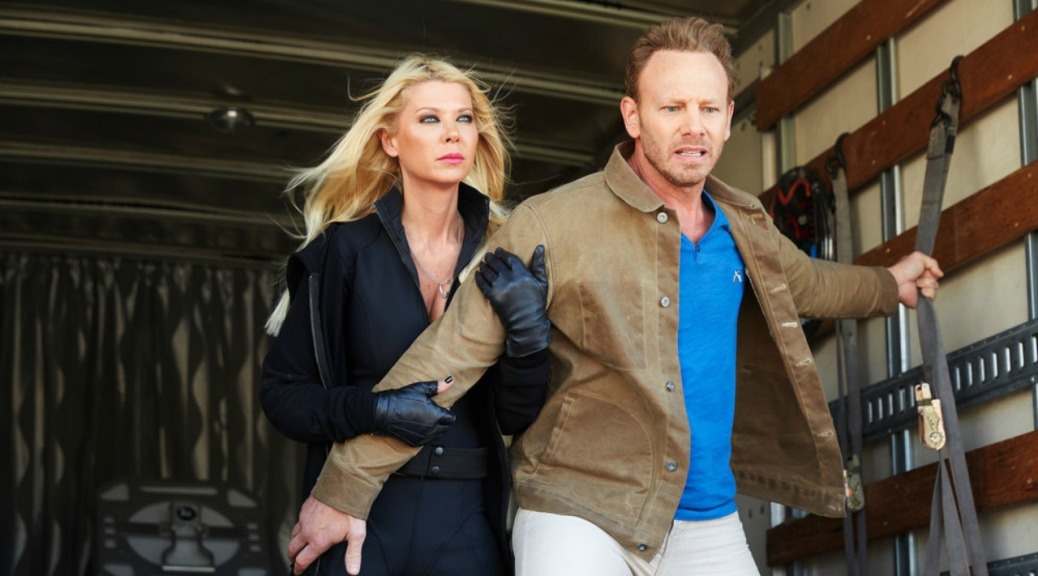 Oh Sharknado, what are we to do with you? Being the main vein of Syfy’s annual income, a trilogy just wasn’t enough. Sharknado needs to be a saga!

For the uninitiated, Sharknado is exactly the Frankenstein’s monster it sounds like: sharks + tornadoes = sharks inside tornadoes aiming to kill everybody. It’s Jaws meets Twister, etc. etc. etc. What began as an innocent, Tara Reid-starring B-movie on basic cable has blown up to the appointment viewing, C-list celebrity cameo filled annual event that we now know. We’ve survived four years of Sharknado, and we didn’t even get a stupid T-shirt.

To understand the tone of the Sharknado-verse, just look at the climactic end of Sharknado 3: Oh Hell No!. Our heroes fight sharks in space, stars Ian Ziering and Tara Reid are both eaten by sharks which fall back to Earth, they both escape from said shark bellies, Tara Reid pushing out first a newborn baby. Depending on who you ask, the films are a hilarious self-aware romp through science fiction insanity, or they are a tired self-aware dirge that is trying too hard to be tongue-in-cheek (and trying harder and harder with each successive sequel to be all the more ridiculous).

Five years after the end of the events in Sharknado 3, Fin Shepard (Ziering) takes a vacation from raising his son and travels to Las Vegas. And yes, his name is Fin Shepard, Fin as in shark and Shepard as in savior figure. Subtle, right? While in Vegas, the unexpected happens…scratch that, the only possible outcome happens: Sharknado.

Remember when I mentioned a cavalcade of C-list celebrity cameos? Well, Sharknado 4 is no different. These cameos are not your average cameos, however. In most cases, the “celebrities” in question are people you recognize from somewhere but have no idea what their name is. Or you see someone who is getting an inordinate amount of screentime for an extra and you reach the conclusion, after much pondering, that the person must be a washed-up celebrity.

Except Carrot Top, of course. He is the exception to the rule. Because Carrot Top is hilarious. Right? Carrot Top still has his finger on the pulse of what’s funny, right? It isn’t as if his character of an Uber driver seems somewhat fitting; as in, he might have used his own Uber-registered car for the shoot.

What I’m getting at with the cameos is this. The Sharknado franchise has obviously served Syfy well, to the extent that the creative team behind the films must be getting bigger budgets with each new film. This budget is never seen on-screen (I mean, look at those amazing CGI car effects in the film’s first action sequence!). I am convinced, then, that the money that director Anthony C. Ferrante receives for the films are quickly disposed of by enlisting as many (semi-)recognizable faces as possible. Being killed by a shark in a Sharknado movie seems to hold the same novelty honor as being slimed on Nickelodeon in the ’90s.

“The B-movie cheese is what gives the films its irascible charm, though!” is what I hear you saying. And you would be right if the films had any charm. They have Ian Ziering, a poor man’s Christian Slater, and a selection of scantily clad women (in the case of The 4th Awakens there is Masiela Lusha front and center, because they’re not in Kansas anymore; they’re in Vegas). But the camp is so contrived and forced down the throat that it leaves a bad taste in the mouth. The most campy charm the Sharknado films have comes in the form of a writer whose name is Thunder. Thunder!

Sharknado‘s kitsch novelty has run its course. If we are being honest with ourselves, it ran its course a sequel ago. You can only up the ante on a ridiculous, one-note premise to a certain level before it becomes a redundant farce of itself. A farce of a farce. A blur of faces and poor CGI and lackadaisical original music and narrative absurdities (they blow up the Grand Canyon…blow it up? How do you blow up a hole!?).

Did I mention that this particular Sharknado doesn’t originate in water? No, it is desert-based. The sharks appear out of thin air, I guess. So much for “matter can be neither created or destroyed.”

Look into this movie, and all you see is insane logic and an attempt by the creative team behind the film to be in on the joke. Suspend your disbelief, and you remain witness to poor acting, poor production, a script full of movie quotes and bad puns, and a gaudy display of celebrity self-service. View it as a beautiful trainwreck, and you will find only the latter. With Sharknado 4: The 4th Awakens, it is painfully evident that the joke has grown cold, if it ever had firepower in the first place.