Elizabeth Sloane (Jessica Chastain), a take-no-prisoners Washington lobbyist, comes under scrutiny by Congress for potentially illegal dealings. The film opens on a Congressional hearing, then jumps three months back to establish how Sloane ends up in this situation. As the film jumps back and forth between temporal locations, an intricate story of morally gray political competition emerges. 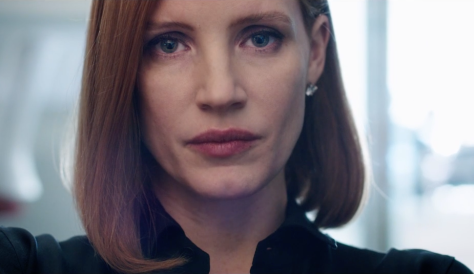 Miss Sloane paces with the snappy dialogue of an Aaron Sorkin drama. It is no wonder that the film sports a couple of Sorkin’s previous collaborators. With a political drama such as this, a snappy script feels imperative. Here, it works effectively for what it is putting forth in terms of plotting.

As the eponymous figure, the show is Chastain’s to steer. Her ethically questionable character is presented icy with a number of ticks that break that ice, but Chastain only allows these cracks to become visible when it is most pertinent to the development of her character. Her delivery of the fast-paced, quippy dialogue is the bread and butter of the film, as she commands attention with every line she utters.

Miss Sloane is a darkly humorous character piece that is also kinda sorta about the gun lobby. While the plot itself is only as entertaining as you can throw it, the witty script and lead performance keeps the film from slipping into obscurity.

The film knows its particular draws and plays to its strengths accordingly. For what it is, the film is a tad overlong, but the pacing holds up for the majority of the runtime. At the very least, Miss Sloane is a political drama for political drama fans whose lead actress makes the film what it is.