Thus is the cast of characters initially established in Infinity Baby. They all work at different rungs of the ladder for the eponymous company, whose aim is to get rid of thousands of babies who never age. A botched stem cell experiment, compliments of Mitsubishi. 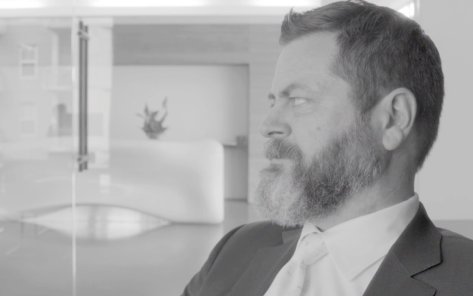 The film fully acknowledges the laundry list of flaws that this infinity baby premise presents. In fact, it takes about 6-7 minutes explaining the absurdism of it all as the lackeys, Larry and Malcolm,  attempt to pawn off one of the babies on a potential client (Jennifer Prediger). When this fails, they decide to take a crack at “raising” (read: tolerate one changed diaper a week) the baby on their own. A feat that will earn them $20,000.

Meanwhile, hyper-privileged relative of high profile Infinity Baby execs., Ben (Culkin), manages to break up with Theresa (Noel Wells) using the excuse of his hard to please mother (Megan Mullally) and tolerate the company of Alison (Trieste Kelly Dunn) over the course of the two months that Larry and Malcolm keep their infinity baby.

Larry and Malcolm, in their attempts to convince the client to take the infinity baby, argue that the introduction of an interminable baby will solve the unhappiness and loneliness of life. It will solve apathy.

Unfortunately, it only manages to perpetuate apathy. Or, at the very least, follow apathy wherever it exists in the world. Ben, Larry, Malcolm, Offerman’s Neo. They all live in a plague of apathy. How they cope with this “not too distant future” of unhappiness is terribly different.

Thus is the intriguing narration of Infinity Baby. The characters all attempt to find some semblance of control over the apathetic existence that they trudge through.

Neo powers through with stoic assertiveness. Ben bounces from relationship to relationship, using his flames as a means of projecting his own impotence and inadequacies. Larry takes himself down the stereotypical wagon-ride of drink, knowing full well that it is leading him to a downward spiral. And Malcolm, ironically painted the most dim of them all, does his best to find a silver lining in it all, in spite of the dissonance that this creates.

Infinity Baby attempts to satirize not only the apathetic, listless attitudes of the aging—but never mentally—youth (while also remaining oddly earnest about its characters’ apathetic plights), but also the indie film gaze that often attempts to do the same.

A telling monologue by Starr briefly explains it all at the close of the film (perhaps equally telling is the fact that it comes from Starr’s Malcolm). Characters are meant to change and grow, and yet no one here appears to change at all, at least not beyond physical aberrations.

Everyone, save perhaps for Malcolm, remains static. The only change that comes to the characters—most of them, in fact—is the realization of their place in the cosmic joke of apathetic existence. How they react to this realization changes very little in their character, but instead perpetuates the vices that they use to suppress their apathy.

Through an indie film lens, this is the “open-ended” conclusion. It is the third act lacking the resolution necessary to fully tell a story. The characters are on the brink of change without ever committing to it. It is appropriate, then, that this film is shot in a very indie black and white.

The style of the film acts to add to the film where the character fall flat in their static existence. It is a high energy film with exceedingly low energy characters.

The camera is perhaps the liveliest character in the film. The lazy pans it consistently provides, as characters bounce back and forth in conversation, has more vibrancy than the conversations that the camera is peeking into. In one instance, the pan playfully pulls back to a character that won’t allow the other to speak.

Even a simple dialogue scene between two characters in bed is benefited by an energetic camera. As Ben and Alison speak—they could not be further from each other mentally in terms of their relationship, as we hear through Ben’s inner monologue—the camera rack focuses between them almost at random. It guides our eyes between reactions that remain largely the same, the camera changing unmotivated as if it wants us to see the artifice of the moment.

The camera-play is not perfect, necessarily. That these rack focuses are not motivated, that shot framing can be purposefully off-kilter and capture more empty backdrop than character is subject to viewer interpretation. They do not add anything to the film narratively, and thus can be tossed off as stylistic flair.

Still, the film sports a lively display that keeps the dreary satire from becoming, well, overly dreary. Added to this is a phenomenal hip-hop score from Aesop Rock that complements the tone of the film well.

Infinity Baby has a lot to offer in its short runtime in the way of cinematic energy and narrative depth. And it’s also just funny. Even before diving into any satire, the film is funny. Can you ask for anything more from a comedy?

If you ask that of a comedy about pawned-off babies that never age due to the intersectionality of the private and public spheres, perhaps you would expect more than merely a couple of one-liners. The film has those added levels, but those levels are not requisite for the film to work comedically.

Full disclosure, CineFiles saw a film festival screening of Infinity Baby, and the film was not fully completed at the time. The film ran less than 75 minutes from a shooting script over 100 pages long, as designated by director Bob Byington. We hope to take a look at the film again when the theatrical cut is released to the public and make a comparative/updated review of the film.

The cut we saw was very good, although a film hovering around the 70-minute mark can almost always benefit from some fleshing out. Noticeable problems that came up during the screening were some frenetic edits and a general pacing that might have been a tad too rapid. The hope is that the final edit would fix these pacing issues, so we neglected to comment on these issues during the body of the review.

Also not mentioned in the body of the review, criminally, is the acting, which is superb. Nearly every cast member pulls out a performance that could equal their best. Dunn and Mullally, in particular, steal the show in their scene together.