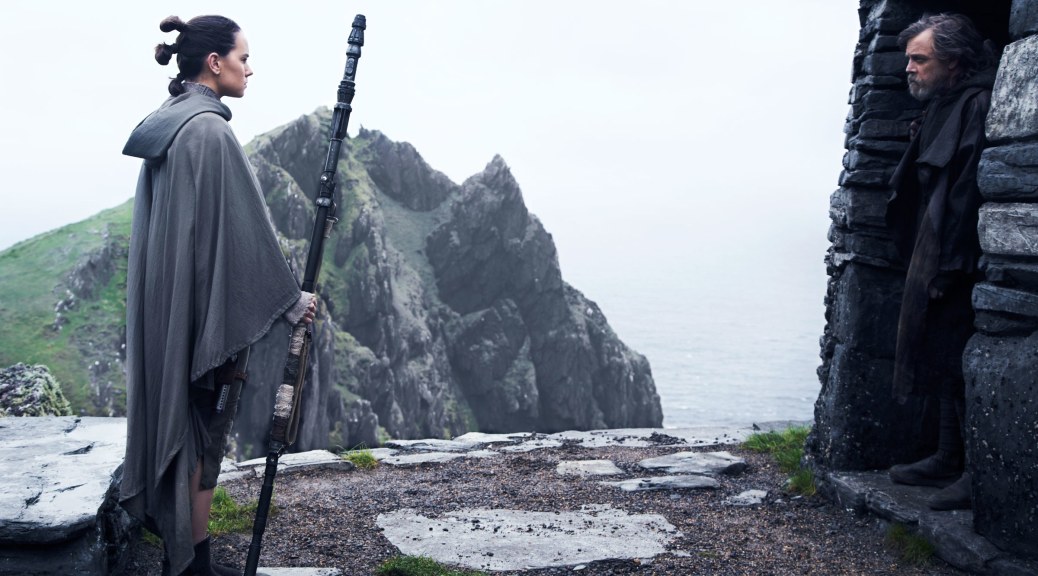 Note: Yep, spoilers. I’m not bothering to attempt this review without actually talking about the film.

From the first sequence of Star Wars: The Last Jedi, it is clear that what you are watching is going to be a different take on the Star Wars universe. It is a dogfight in the skies of space, with the roguish Poe Dameron (Oscar Isaac) quipping as he leads a squadron of bombers toward the First Order fleet.

This sequence engages with the formulaic conceit of a Star Wars dogfight, and it even replicates cockpit-view shots from previous films. However, these recognizable moments breeze by and are followed by utterly incredible shots and edits that make for an opening battle sequence that is riveting from moment to moment.

This opening sequence is a good encapsulation of what The Last Jedi is at its core. The Star Wars formula remains, and much of the plot feels familiar. All of the slight alterations, both cinematically and narratively, elevate this film to a place that is exhilarating.

It behooves me to get some negatives out of the way before going any further.

1) The character of Rose (Kelly Marie Tran) begins so promising—the perfect cinematic execution of her sister’s end allows us to instantaneously connect with her—only to have her depth potential flatten out as the film goes on.

2) Much of the humor reads more forced (Oh Lord, the puns have started) than it did in The Force Awakens. On the other hand, there is far less needless fan service here.

3) The diversion on the casino planet will be a pace-killer in future watches. It introduces some interesting wrinkles, mainly by way of Benecio del Toro’s thief character, but mainly it reads like an off-putting tangent.

4) Laura Dern’s character, although she has an honorable end, doesn’t serve the plot of the film very well (i.e. why would she hide her plan from Poe to the point of almost getting everyone killed other than to serve as a plot device).

6) Snoke’s (Andy Serkis) throne room is perhaps too red. As in: we get it.

7) Call me heartless, I’m not into the Porgs.

There are plenty of minor shortcomings, things that nay-sayers will use to rail against this film, no doubt. But there’s no use wasting time picking nits. They have shampoo for that.

The heart of this new trilogy pulsates stronger in The Last Jedi than in The Force Awakens, and Episode VII did a good job in its own right. The major characters are given depth and motivation and emotional import that allows for us to be gripped once these characters are dropped into tricky situations.

Even a character like Poe, who had no dimension to him in The Force Awakens, is given a full arc here that feels warranted. Yes, this arc ends as one would expect, but it is an earned end.

The Kylo Ren-Rey relationship, aka the crux of this film and perhaps the trilogy as a whole, is fascinating. The downside of this is that Rey is sidelined by her training, another instance where the pacing of this lengthy film may become bogged down during re-watches. The payoff, however, is worth it. Kylo Ren becomes a more intriguing character in this moment where he makes the decision to kill Snoke in his pursuit of power.

The pacing issues of the film are what will determine its long-term legacy in the Star Wars canon. Sure, during a Thursday-night preview on an IMAX screen with a packed house The Last Jedi is going to feel exciting. But there are long stretches of this film that feel slower than the fantastic action sequences and character-building moments. As time goes on, this film might be less re-watchable than most other Star Wars films.

The cinematics of The Last Jedi are truly impressive. The staging and shooting of action sequences, be it lightsaber duels or space dogfights, make for a few jaw-dropping moments. Where Rian Johnson decides to cue in the classic score pieces, as well as when he decides to use no sound at all, adds gravity to situations that are already inherently tense and emotional.

This is the biggest point to takeaway from The Last Jedi. The Force Awakens felt familiar. The Last Jedi feels somewhat progressive, if only in terms of action movie direction. But unlike with Rogue One, which was only salvageable because of its action directing, Episode VIII combines what was promising about The Force Awakens and what was modern about the action in Rogue One in order to create a truly entertaining piece of popcorn cinema.

Star Wars: The Last Jedi: B+