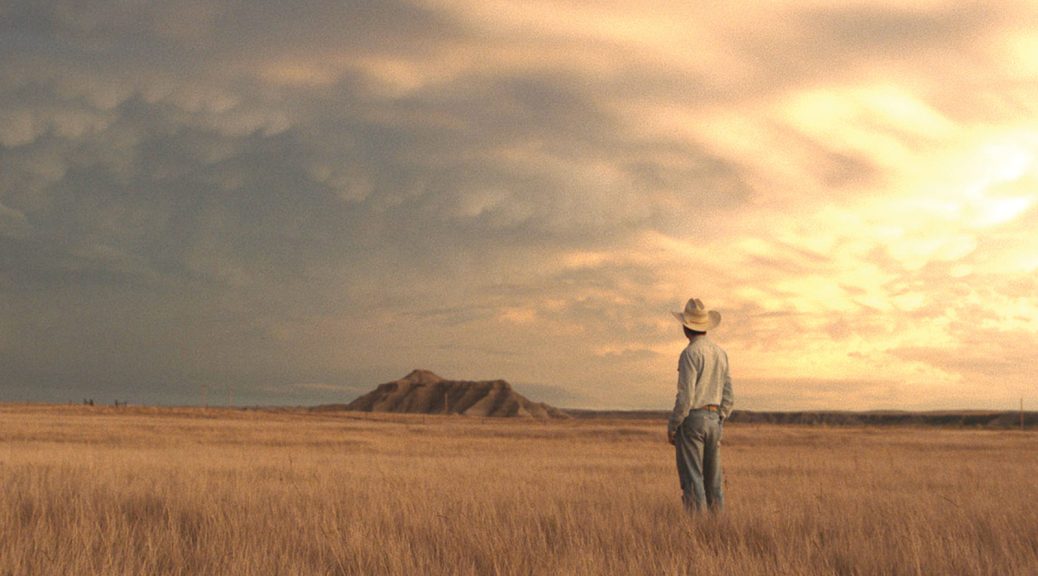 Where to begin with Chloe Zhao’s The Rider? We could start by tossing around words like “rare,” “must-see,” “transcendent.” It is, after all, a rare construction that transcends the limits of form to make it a must-see film-going experience. Simple buzz words don’t really do it justice, though, as The Rider is comprised of so many artistic strokes done great.

Zhao’s film blends fiction with reality by employing non-actors to play fictional versions of themselves in a story so immensely human that it truly feels at times like a documentary. Think Kiarostami’s Close-up, but instead of being an experiment of formal deconstruction it is a rich vein which is mined for all of the uncut gems of the human condition that can fit into 100 minutes.

We enter the film watching Brady (Brady Jandreau), who wakes before dawn and tends to a wound on his head. The stapled gash is a makeup job covering up Jandreau’s real scar. Both Jandreau and his fictional counterpart sustained the injury after being thrown from a horse.

In the film, Brady is the quiet, pensive sort that is fitting of a rugged cowboy. Following the surgery, minor seizures cause his hand to freeze up. The more he stresses his body, the worst these seizures are. Unsurprisingly, he isn’t supposed to ride or train horses anymore, let alone ride the rodeo. Yet his friends treat it as if he should have been back on the horse yesterday.

The film probes this concept of masculinity, this “cowboy up” mentality. But it never does so in a trite manner. It does not simply label the masculinity as toxic, but explores the potential toxicity thoroughly. There is a pride in Brady that keeps him from healing himself, but it isn’t a brash and superficial trait.

There is complexity to Brady’s motivations. He views riding and training horses as his purpose, just as it is the horse’s purpose to lope along the plains. Without that purpose, he sees himself as no better than an injured horse that is best off put out of its misery.

Jandreau’s performance and Zhao’s direction shows us this purpose. The scenes in which Brady trains horses are astoundingly compelling. The camera intimately placed, either inside the pen with Brady or just behind the fence peeking out from behind the post, we exhibit Jandreau at work. There is no faking with mere acting the skill that is on display. There is an intensity and a compassion to these interactions between Jandreau and the horses that break the bounds of cinematic artifice.

And this is what is so brilliant about The Rider. The performances from the non-actor cast are nuanced and emotionally rich, enough so that you wouldn’t know they were non-actors just be watching them. But their personal connections to the setting and story shine through, and this elevates the performances even more. This is not to diminish these people as actors. Jandreau, in particular, exercises some real acting chops. But their familiarity with and personal stake in the world of the film makes it all feel genuine and real.

Stylistically, too, there are scenes that could pass as documentary footage. The scenes where Jandreau visits his friend Lane Scott in the hospital have an intimacy and a rawness to them.

As much as certain scenes do feel like documentary, the fictional narrative of The Rider stands on its own. Ignore the paratextual element of non-professional actors playing versions of themselves, and the film still reads as a beautiful examination of masculinity reevaluated. There is a slowness to how the plot develops, mainly because Brady is such an internalized presence on-screen, but that points to a restraint in screenwriting that is poignant.

In most cases, poor screenwriting becomes evident to the audience in the form of telegraphing. A bad script will tell you what you are meant to feel, or what you need to know, or what the characters feel and desire. A script that bears intelligence is often the one that does not make it easy for its characters to do or say what they want to. (Or if they do or say those things it doesn’t play out as cleanly as they would have hoped).

Brady has a lot on his mind. We can see it. We can feel it. And we get a good understanding of what those thoughts are without him ever really saying what they are. The actions he takes are in defiance of what he ought to do. This makes him a compelling protagonist without the script ever feeling the need to explain to us why he would act in such a potentially destructive manner.

Minor characters, too, engage in this depth of subtextual development. Brady’s friends, in a lesser movie, would be the same enabling figures that they are in this movie, but they would also be nothing more than this enabling. This would make the conversation about masculinity and pride a myopic one, and thus the entire film would be boring and superficial.

His friends may not understand his situation, and they may egg him on to get back in the rodeo. But when the rubber hits the road they act like human beings and express their admiration for Brady. They aren’t merely an obstacle; they’re characters.

Aspects of the story, namely the father-son relationship, may feel overly conventional. Especially when it comes to how the climax resolves itself, this relationship feels cherry-picked from other films. But Brady’s father (Tim Jandreau) is not a plot device. Their relationship ultimately means something to Brady and his development as a character. And the father character has to come to terms with a lot of things about his son that we only see glimpses of on camera, which makes this conventional relationship feel genuine.

From its intimate visual design to its nuanced storytelling to its weighted sense of reality, The Rider is a cinematic accomplishment. There is terse visual poetry on display in certain scenes, but this is not accomplished through sacrificing other vital components of a film. It isn’t style over substance, nor is it narrative over form. It is a seamless integration of great style and great narrative.