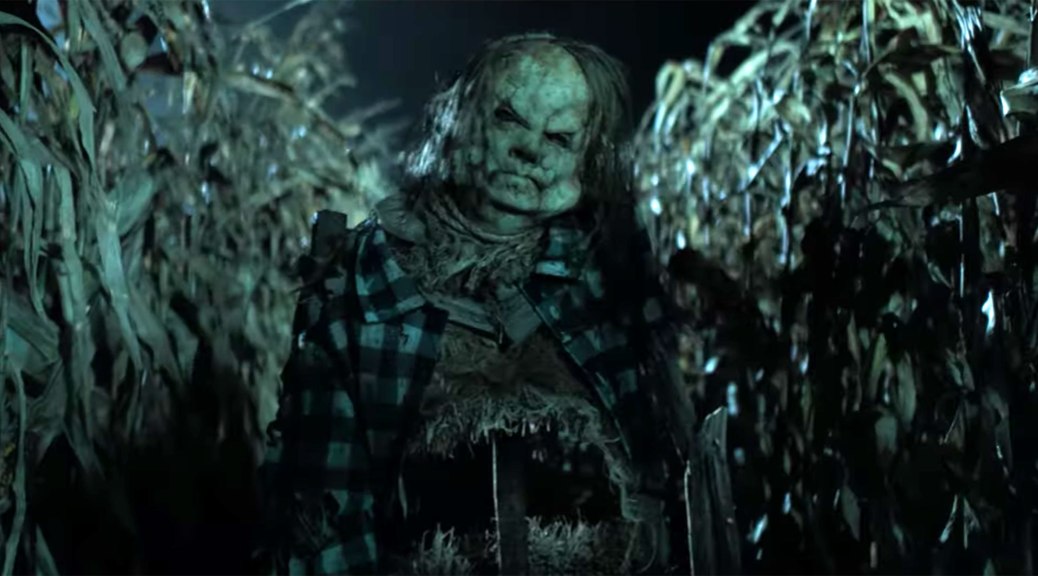 The short story series created by Alvin Schwartz and illustrated by Stephen Gammell, which begins with Scary Stories to Tell in the Dark, is beloved by some, infamous to others. Ostensibly a children’s book of campfire folk tales retold, the book often received criticism for Gammell’s illustrations, these shaded sketches of wispy, gangly, grotesque creatures and corpses.

As a child, these illustrations fascinated me, and they still hold up for me today as being some of the best art in children’s books. (Also high on that list would be Brett Helquist’s cover art for the Series of Unfortunate Events books. Interestingly enough, Helquist went on to do illustrations for the re-release edition of Scary Stories in 2011. People were understandably unhappy with the changes, but the art is still good in its own right).

A film adaptation of Schwartz’ books had been in the works for some time. Guillermo del Toro worked on a draft of the script and was originally slated to direct. Trollhunter and The Autopsy of Jane Doe director Andre Ovredal was brought in in his place, given that del Toro is busy with other projects (del Toro retains a producing credit and was reportedly heavily involved in the final cut of the film).

However, it is hard to say that Scary Stories to Tell in the Dark is coming with a lot of buzz on its heels. In the dying month at the tail-end of a whimper of a Summer, Scary Stories was primed to be forgotten. In fact, I started to think it was a dump release: drop it in on a weekend with little competition, screen it for critics a day before release, and hope that the ROI comes from a modest opening weekend. Given the movie takes place around the Halloween holiday, an October release seemed like a more appropriate slot.

But Scary Stories to Tell in the Dark is no dump-and-run movie. It is a teen-scream-lite popcorn horror flick with some heart, plenty of camp, and impressive practical effects (well, mostly practical). Is it the next classic horror film? Absolutely not. Does it overstay its welcome by about 20 minutes? You know it. (Apparently del Toro’s to thank for this not being 20 minutes longer than what it is in its present form).

No, Scary Stories is an imperfect alteration of its source material, something that brushes up against the grim-but-for-children tone of the books without fully succeeding from a tonal front. That being said, it is a relatively fun time.

The film uses Halloween night, 1968 as its impetus. Three friends, Stella (Zoe Margaret Colletti), Chuck (Austin Zajur), and Auggie (Gabriel Rush) escape to a drive-in movie theater after executing a little Halloween trick on the bully Tommy’s (Austin Abrams) car. They find refuge in the car of seeming runaway Ramon (Michael Garza) and, after evading Tommy, decide to conclude their Halloween night at a haunted house.

It is the house of Sarah Bellows, a woman that allegedly hanged herself after a life of being mistreated by her family and kept locked away in the basement. When Tommy finds them there and locks them in the basement, Stella stumbles upon Sarah’s book of scary stories, which, as the urban legend goes, she wrote using the blood of children and will read from to people entering the house.

Sarah Bellow’s book presents the inciting incident and the framing device of the film. Stella takes the book from the house, and the book starts writing itself before their eyes. Sarah Bellows from the grave, it seems, is writing the demise of the teens who were in her house that Halloween night. As the stories get written, they play out in real life, and the teens start disappearing.

Each “story” in the movie is an adaptation of one of Schwartz’ stories, making this movie a series of retellings retelling from the books that retell urban legends that have been retold throughout time. It sounds meta, but the movie never for a moment stops to bat an eye at the concept of metatextuality. The characters here play the scenarios in complete earnest, making for some moments of horror-comedy but mostly allowing the film to be something more grim-but-for-children…

Well, to say that this is for children is not quite accurate. Some early reviews headline that this is a film for kids. NPR‘s headline claims “kid-friendly chills,” while Rolling Stone calls it “macabre 101 for kids.” I would simply warn that “kids” is pushing slightly. This is a PG-13 horror film that, considering the rating, doesn’t pull its punches. Death, sometimes involving teens, is depicted. One death, in particular, is shown in frame. It’s not the gory mess that an R-rated adaptation would be, but it is still more of a teenage affair.

Some of the adaptations hue closely to the original story, while others are altered to fit the framing device. And while some fans who are beholden to the work of Gammell may find that the cinematic depictions of the illustrations don’t stack up to the original, the design and execution of macabre characters like “Harold” and the “Me Tie Dough’ty Walker” are impressive and tactile. (Other less tactile and thus less effective bits use more CGI; a certain stampede of spiders, for example).

All in all, the way by which the script weaves short stories into a larger narrative is surprisingly smooth. The biggest hurdle this script has to deal with is integrating the source material into something that a moviegoing audience would be willing to pay to see. The result is a somewhat standard teen horror narrative, but it’s a somewhat standard narrative that still cares about its characters. At least, it cares about its lead characters.

In a movie where you come to see a lumpy scarecrow come to life to attack a bully in a cornfield, you might not expect there to be much heart to its story. But Stella is given a meaningful character arc that is not shoe-horned into the A-plot, but that sits on the back burner getting developed with various levels of subtlety until the movie calls for an emotional payoff. That payoff is worth it, and it makes one wonder how so many lazy horror movies fail at getting us to root for the protagonists.

Scary Stories to Tell in the Dark is imperfect. It is bulky and slightly overlong. It hits onto a somewhat odd tone with how it decides to resolve some of its characters’ arcs (which leads to an even odder sequel-baiting ending). But it is also effectively composed. The character designs are well-executed. The cheesy scenes that draw out silence and POV shots at least do so with a sense of pacing. And the story structure that could have been lazy instead brings out characters worth rooting for.

Scary Stories to Tell in the Dark: B-