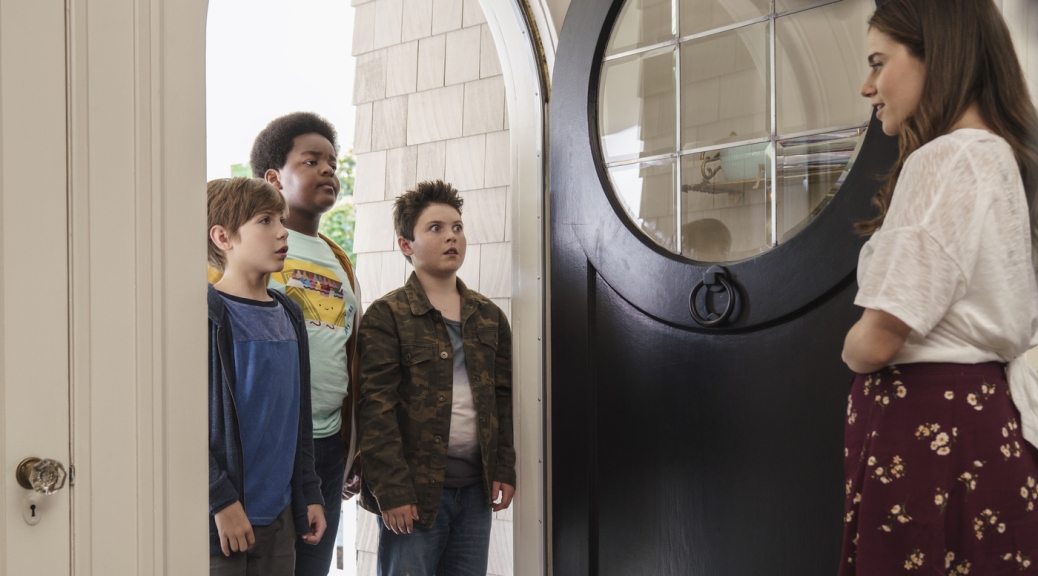 Good Boys is the film for people who think preteens swearing and misunderstanding the sexual themes around them is hilarious. If you want to see tween boys wielding sex toys as weapons or giving a sex toy as a gift or using a sex toy to practice kissing or barring doors with a sex toy then this movie is for you.

Otherwise, the bit gets old.

Max (Jacob Tremblay) needs the party in order to fulfill his romantic goal of kissing his “future wife” Brixlee (Millie Davis) (a girl he’s never actually talked to). Thor (Brady Noon) needs the party in order to ascend into the cool kid status that he yearns for, a dream he can actualize by taking a sip of beer. Lucas (Keith L. Williams, the clear MVP of the film) needs…well, it doesn’t seem like he actually wants to go to the party. But he’s in it for his friends, because they are the “Bean Bag Boys,” and the Bean Bag Boys are for life.

Their chances of attending the party are put in jeopardy when they lose Max’s dad’s (Will Forte) drone. It is stolen by Max’s neighbor Hannah (Molly Gordon) after the boys use it to spy on her in the hopes that they may learn proper kissing technique. This lights off a fuse, a chain of events that gets more and more crazy as the day goes on. And that’s pretty much the movie.

The plot of Good Boys is the series of incidents that eventually lead to the party. The script concerns itself with offbeat scenarios, most of them littered with sexual paraphernalia, that are only loosely connected and do not progress a narrative. It is episodic, I guess, but it tries at a loose linear trajectory. Either way, it makes for a narrative structure that is not cohesive, causing for a pacing that deflates as it goes along.

Stupnitsky and Eisenberg have written themselves into this corner before with their first film Year One. This is another film that progresses episodic with a vague sense of linearity that doesn’t really mean anything. This makes the film feel dramatically flat and lumpy in its pacing. That most of their work has been in television makes some sense, then, as television allows for more incident-driven plotting, where character development needn’t happen quickly.

Good Boys has more of a structure than Year One, and it certainly has more of an emotional core. But the film suffers from its central conceit of boys getting into trouble. Most of the episodic scenes are passable for their comedy, but they are also forgettable. Because the film plants emotional seeds which only pay off in the final 20 minutes, the zany events in between don’t feel like anything substantial. It is crude joke after crude joke, and most of them are the same couple of crude jokes repeated.

Tremblay, Williams, and Noon have great chemistry together, and they all provide fun and endearing performances. Williams, as previously noted, is the standout. He is asked to deliver the same joke over and over, and his line deliveries never let the joke get old.

On its face, Good Boys has more of an appeal than Superbad, in that it is not a film about teenage boys trying to score with chicks. It is a movie about boys who don’t understand sex and relationships, thus the pursuit of romance is comically flawed. But the script of Good Boys is not as clever. The overall structure of its narrative is less cohesive. And the result will be likely less memorable (and this is coming from a guy whose only memories of Superbad are two dimwitted cops, McLovin, a period joke, and Jonah Hill drunkenly booping Michael Cera’s nose).

Good Boys feels more like a flash-in-the-pan comedy. People may talk about that raunchy new comedy where 10-year-old boys swear and ride a sex swing (how scandalous!), but it isn’t a particularly lively or fulfilling comedy experience.