In Mr. Jones, the eponymous Gareth Jones (James Norton) is a Welsh freelance journalist who travels to the Soviet Union in 1933 to interview Joseph Stalin. But the film begins outside of this man’s story, instead landscaping a pastoral farm—animals milling about, fields of grain waving with the wind. Jones, in his journalistic pursuit, stumbles upon a nefarious truth behind Stalin’s Five Year Plan—the Holodomor, in which Ukraine’s grain was exported in vast quantities that caused mass, genocidal starvation in the region. 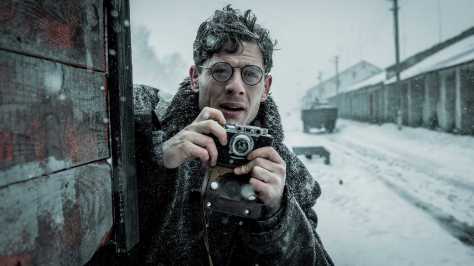 Director Agnieszka Holland directs some great sequences in Mr. Jones—this opening sequence; a woozy, heroin-fueled party; a quiet, haunting interlude on a train. Still, stretches of the film are rather staid. The first act relies on undercurrents of tension stemming from covert surveillance tactics to produce the thrill in this journalistic thriller. The more this surveillance strong-arming is visible, the less threatening it appears (at one point, a Soviet goon places a cup up to a wall in an attempt to intercept a secretive conversation between Jones and a source). Later, this reliance will be on iconography of death and famine, which is shocking to a point but becomes repetitive in a lengthy middle act.

What works best to put the viewer at unease are the more bureaucratic forms of control, like a hotel clerk very pointedly hinting that Jones will not be welcome in Moscow for more than two days, or the obfuscation of facts disseminated by Pulitzer Prize-winning reporter Walter Duranty (Peter Sarsgaard). The struggle for Jones to attain the truth is one thing, but the struggle to assert this truth and instigate change is a different war entirely. This latter part is arguably the most compelling, but it does not become a primary focus until the final few scenes.

In the meantime, it is mainly Jones’ savvy and sacrifice that provides a meaningful throughline. With his journalistic pursuit noble (Norton is, fittingly, nobly understated in his performance) and his methods adept, the drive for knowledge fuels the film. The emotional throughlines, on the other hand, are less effective. They run flatter. The relationship between Jones and fellow writer Ada Brooks (Vanessa Kirby), for one, reads underdeveloped.

Andrea Chalupa’s script makes a pressing call for the importance of fact-finding and integrity in journalism, presenting a protagonist who sacrifices his own body and makes difficult decisions to try and inform the world of a harrowing atrocity, and the most visible antagonist embodies the antithesis. While the film, when taken as a whole, does not contain the most efficient or focused narrative, this underlying tension remains compelling. As such, Mr. Jones is a powerful watch, if not an uneven one.

Mr. Jones will be available On Digital June 19th and On Demand July 3rd.