The 2020, online-only edition of Fantasia Festival is less than a week away, and this year’s lineup is filled with intriguing genre films from around the world. Over the next few weeks, CineFiles will be bringing you coverage of the event, with both feature and roundup reviews from the fest.

Today, we look at three on-demand titles that are coming down the pike: Sleep, Yummy, and The Columnist. 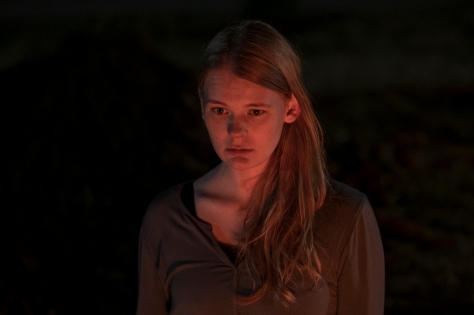 Marlene (Sandra Hüller) is plagued by nightmares of a hotel, three men who ran it until they committed suicide, and a warthog. She travels to the hotel to try and find some sort of closure, only to wind up in the hospital. Her daughter Mona (Gro Swantje Kohlhof) takes her place at the hotel, determined to uncover the mystery of these dreams, which she is also beginning to experience.

A generational mystery which reveals itself through dreams, Sleep takes multiple paths to its final destination, and none of them are easily anticipated. Slowly, the plot unfolds, doling out intriguing twists as it makes its way to its climax. This end kills the pace slightly, cycling who has the upper hand a few too many times as it stretches on. But Sleep is quietly engaging, not the least of which because of the great lead performance from Gro Swantje Kohlhof.

Lars Damoiseaux and co-writer Eveline Hagenbeek bring us the zombie film Yummy. The film follows a woman (Maaike Neuville) driving to a remote hospital with her boyfriend (Bart Hollanders) and mother (Annick Christiaens) to undergo breast reduction surgery. At the hospital, they are informed of the miraculous innovations in plastic surgery the lead surgeon is on the verge of realizing through “experimental stem cell” research. The truth behind this research, our group of protagonists will soon learn, is far more sinister than it initially sounds.

Yummy accomplishes (mostly) the feat of towing the fine line between tongue-in-cheek and horrific. Given the pure formula that is the zombie film, it is refreshing to see a darkly comic yet still abject vision of an oncoming zombie apocalypse. The film drops the ball in its final minutes, when the charm turns to pure cynicism. Overall, though, Yummy is a charming, nasty little horror comedy. It presents clever twists on familiar horror movie tropes and strings along a plot with a number of pleasant (and morbidly delectable) surprises.

Ivo van Aart’s The Columnist taps into what is perhaps many people’s frustration with social media. The film begins with the eponymous columnist, Femke Boot (Katja Herbers), appealing to internet users’ better nature, calling for decency and civil debate on social media. The result? Boot receives a sharp influx of internet hate, trolling, and death threats.

As Boot attempts to push through writer’s block and write a novel, she can’t help but procrastinate by scrolling through the dozens of hate messages in her Twitter mentions. Slowly, it drives her mad with anger. She then realizes that one of her critics is her neighbor. So one day, when he is working on the roof of their complex, she gives him a little push…

The plot has a few convenient moments to move it along at a good pace as it follows Boot down her mental unraveling, but these conveniences are in service of a nasty satire with a simple premise and a lot of bite. Herbers gives a propellant, devilish performance that makes The Columnist an entertaining watch up to the very end. And the culmination of her character’s arc is a surprising emotional punch followed by a resonant final flourish.