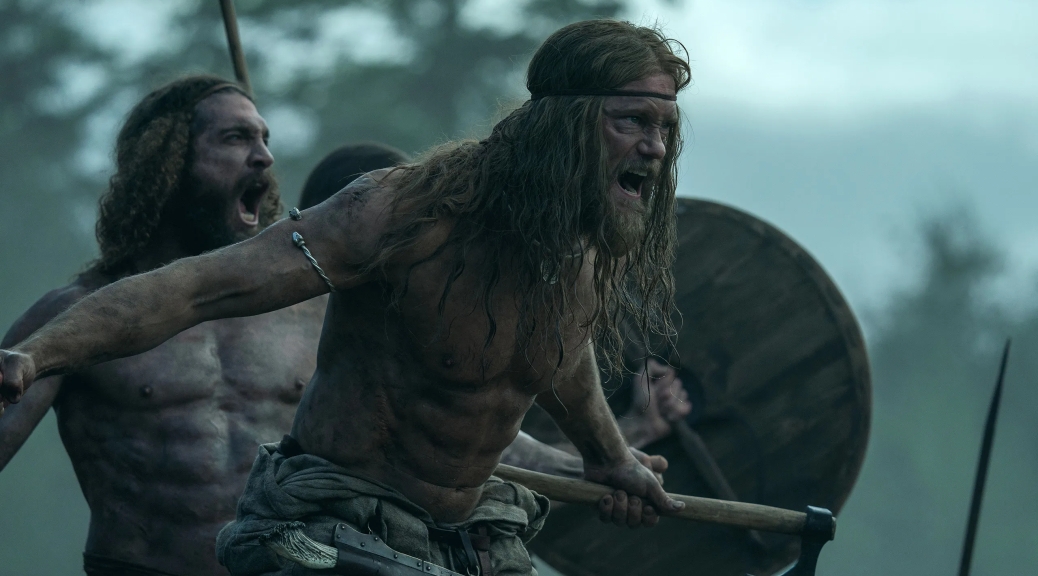 I think Robert Eggers is one of the most fascinating American filmmakers working today. The Witch is my favorite horror movie of the 2010s. It was an accomplished debut. Instead of going down the road of the “horror auteur,” though, Eggers turned to something more experimental in The Lighthouse, a film which sits unsteadily on the boundaries of multiple genres (I would call it a psychological horror fantasy dramedy sea shanty fever dream, maybe).

Now, with The Northman, Eggers forays into a Viking action adventure film which mixes revenge drama with Grecian tragedy and a hint of Shakespeare for good measure. The film exists in heightened spaces of class dominion and fatalist prophecy, where literary allusion and Norse mythology mingle with blunt force trauma and obscene levels of emotional repression. Putting it in writing, it sounds like an utter mess. Shockingly, it is not.

It is chaotic, sure. Exhausting, definitely. An acute defibrillator shock on the senses, of course. But it has a sound narrative structure housing a plot which marches forward like a steady, beating drum toward a clear and logical conclusion. It has a smooth camera that comfortably houses every bit of gritty, merciless bloodlust in its frame. Gorgeous landscapes are lit immaculately. The editing jumps us into the next beat of the story like snapping fingers, contributing to a nearly 140-minute mini-epic that is almost perfectly paced. The excitement this movie breeds has as much to do with confident direction and sound craftsmanship from a talented crew as it has to do with brute force.

Just don’t watch it if you like seeing your on-screen horses alive (fair warning).

The Northman embraces masculinity to a degree unlike anything I’ve seen since 300, yet it is fundamentally a movie about the failure of a certain breed of masculinity. In one of the movie’s most compelling (non-bloodshed-related) scenes, a young Amleth (played later by Alexander Skarsgard) joyously joins with his father, King Aurvandil (Ethan Hawke), in a ritual about embracing manhood. As heir to the King, Amleth must be prepared to seek bloody revenge on whoever slays his father in battle (which his father has declared will be an inevitability, as the most honorable way to die is on the field of battle).

The father and son get down on all fours and howl like wolves, making declarations of how they will become men. At the end of the scene, Amleth sheds a single tear, and he is told that he cannot shed another tear until his fate is fulfilled. Immediately following this, Amleth’s father is slain (so it goes…). And Amleth, initially shirking his duty to slay the slayer, runs off, vowing to return a stronger, more hardened man (or, wolf-man? the whole wolf cub into man metaphor doesn’t fully track, but the guy keeps howling until the very last scene, so it is what it is).

The remainder of Amleth’s life is filled with horror, sorrow, and bitterness. Save for one late-arriving shining light, Olga (Anya Taylor-Joy), Amleth is bruised by his past and refuses to let the bruise heal. And he refuses to acknowledge this pain without also acknowledging his bloody destiny. Eliminate all of the decapitation, and this is basically a PSA about how men need to express their emotions.

If that message isn’t for you, the decapitations will likely do. Eggers is not shy in embracing the emotionally-stunted violence, making a Greek tragedy out of the Viking family drama and allowing nearly everything in the family’s vicinity to perish horrifying deaths. It would be monotonous if it wasn’t so expertly executed on a technical level.

The Northman is the definition of “it’s not for everyone,” but sometimes the best movies are. Heightened, theatrical dialogue pairs with intense sequences of hyper-violence, and that is what you get. If that pairing doesn’t sound like a Pinot with a fine Gruyere, then this movie might not be your bag. But if you want a film that puts in center frame Herculean strength in order to really examine what that strength actually amounts to (and, in the process, tacitly commenting on an entire film medium’s history worth of Herculean heroes), then The Northman might be your movie of the year. Either way, I was sold before I even bought the ticket.