An idealistic group of pornographers are looking to find stardom and profits in the late-1970s, just as the home video market is knocking on the door. But this is not Boogie Nights. The group of (mostly) young couples land at a remote homestead in rural Texas to run-and-gun this film, where the threat of violence seems to be just outside the frame. But this is not The Texas Chain Saw Massacre, either. 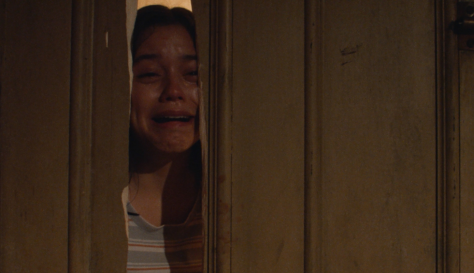 In 1979, six Houston natives rent a guest house from an elderly couple in rural Texas. The homeowners are wary of the young folks — they certainly wouldn’t take too kindly to them shooting an amateur adult film on their property.

After Maxine has an odd encounter with Pearl, the elderly woman in the main house (also played by Goth), it becomes increasingly clear that something is not right with the homeowners. At the very least, Pearl is seeking something that she cannot find in this isolated house by the lake. Something not entirely dissimilar to what the lodgers are filming in the barn.

X is in one sense a throwback to the 1970s slasher — writer/director Ti West has become known for his throwback genre films, namely The House of the Devil. In another sense, it is a very modern horror flick, adopting the artsy sheen that its distributor, A24, is known for. Like RJ’s vision for the film The Farmer’s Daughters—he is a character desperately trying to become the art-house auteur of adult entertainment—the intent with X appears to be combining low-brow and middle-brow. The gory exploitation slasher is mixed with the slow-burn thriller.

More accurately, the latter follows the former as two distinct halves of an underdeveloped whole. The first half slowly pulls out the tension like taffy, an approach I found effective. Once the characters reach the secluded home, the sequences are tense and well-staged. The filmmakers’ production is cross-cut with scenes which patiently establish the homeowners’ motivations. West also makes the intriguing choice of cutting between shots during scene transitions (a tactic which disappears almost entirely when we reach the second half).

Beyond the slightly clunky pacing caused by this narrative dichotomy, X has a lot going for it. The cast, front to back, more-than-capably handle this material. Ortega, Goth, and Snow, in particular, give very engaging performances. And West shoots and stages a few great sequences, which stand above the messiness of the film’s overall structure.

Unfortunately, the messiness does not end at the meshing of slow-burn and slasher. There are ideas presented through the plot which do not lead to significant nor satisfying conclusions.

For one, West’s take on sexuality—not the meta-generic element of horror’s propensity to mix sexuality with violence, but the element of which characters here are interested in sex—is one I haven’t seen in a horror film before. But this novel element is deployed without a meaningful end in mind. The motivation of the characters raises more questions than answers, and there is no resolution given for them.

The script also attempts to thread a flimsy through-line involving religion which holds no weight when all is said and done, despite it being brought in as a refrain in the film’s final minutes. A televised congregation haunts the film, backgrounded as bookends to this story, but it does not resonate with the narrative in a distinct or useful way.

X is, visually and performatively, engaging and fun. As a genre exercise, I don’t find it particularly compelling. The film has ideas but doesn’t fully know what to do with them, despite all of the pieces put in place for it all to work.