Age of Cannibals follows two German business consultants on a business trip in Lagos, Nigeria. While moving about their hotel, they try to convince a businessman to move his resources from India to Pakistan, deal with a new, young co-worker, and brashly handle cultural differences. 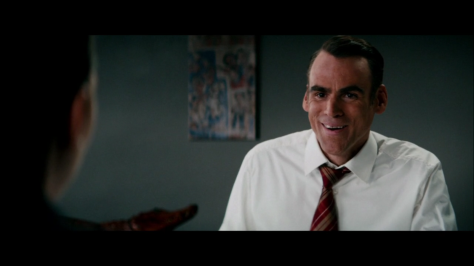 Stylistically, the films is fairly cut and dry. There is little out of the ordinary, save for the theater-style blackouts that mark the transitions between scenes. Given the film is contained completely within the hotel setting, this gives the film the feel of a chamber play.

Furthering this stage atmosphere is the backdrop of the world outside the hotel windows: drab, abstract, clearly artificial. Not only does it appear visually as a set, but it also perfectly encapsulates the world our protagonists are living in: a bubble of ill-informed naivety.

The acting from the three leads (Striesow, Schuttler, and Blomberg) is superb. They embody their respective irate, self-righteous, and neurotic characters well. Aided by the smart script and clever presentation, the actors play off of each other with ease. Blomberg, in particular, delivers a fantastic, whimsical performance, his toothy-grin the focus of many a shot.

Age of Cannibals tackles issues of gender, multiculturalism, and capitalism in a globalized world through the limited perspective of these naive, white collar European characters. For the majority of the film, this accomplishes in delivering the intended dark comedy. The satiric bent is evident, and it is only in the last 20 minutes that this satire devolves into pure farce, where the inevitable intervention of the previously ignored outside world reads less like a commentary and more like a reason to draw the curtain closed.