Rick Alverson’s The Comedy is not a comedy. It is an anti-comedy. A satire of a self-destructive generation gazing on their own broken world. The film opens on a group of people, mostly slightly overweight men, drinking and dancing, spitting beer and stripping nude. This is a commonplace setting for this group of “friends.” 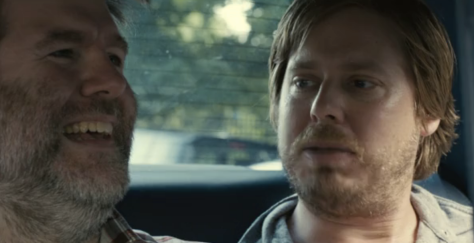 The film stars Tim Heidecker of Tim and Eric fame. Comedy partner Eric Wareheim co-stars, and their presence in the film in one instance is a source of false advertising, where viewers may go in expecting their brand of surrealist humor. In another instance, their anti-comedy tendencies fit perfectly into the sheer awkwardness of this film’s narrative.

This anti-comedy is evident in the first bout of dialogue we get in this film, where Heidecker riffs with his dying father’s nurse about prolapsed anuses and the nurse’s duty of changing the father’s diaper.

The film invites you to dislike Heidecker’s Swanson. In an early scene, he crashes on an affluent couple’s property and helps the gardeners with their work. When the couple comes out, Swanson asks them if the gardeners can use their pool. When they say yes, he isn’t satisfied or happy; he is disappointed, as if catching them in a selfish state would have been more fulfilling. He would rather expose them as upper class baddies than allow the gardeners a generous and spontaneous relief from their work. All the while, Swanson is one of those upper class baddies.

It is not hard to hate Heidecker’s character. Is this the comedy?

Swanson is an aged, possibly alcoholic hipster. He plays the character with a sad desperation that makes for a strong performance, but the character itself is barely a character. He spouts trite philosophical banter and deadpan ball-busting. He is direction-less and eternally gloomy. He, like the film, meanders.

Mainly, this is the point. The film meanders because it has to to serve its narrative and tone. While this makes it a difficult film to power through, one cannot hold this meandering against the film. The Comedy satirizes wasted lives of privileged people. It must meander to highlight hollowness. Our “hero” breaks social norms to lash out against hollowness, even compulsively brushing his teeth throughout the film as it if will clean him of his apathetic world. But the hollowness remains nonetheless.

Does this meandering serve the film, making it more compelling or engaging? No. But the story requires it. The only question left to ask from this assessment is whether the story needed to be told in the first place.

I still don’t know the answer, and, in some ways, Alverson earns some credit for that.

The Comedy is an interesting piece. It doesn’t offer anything of narrative value, but that is seemingly the point. While this experimentation with narrative is interesting, it does not make for a wholly compelling film. Still, it is pleasantly surprising to see Heidecker take on the role with vigor and intensity.

The Comedy can be found on Amazon Video to rent or buy.