Cell is a movie based on a novel by Stephen King. In this adaptation, Clay Riddell (John Cusack), is an artist who, while in an apartment, becomes witness to an apocalyptic event in which a cell phone signal causes users to become feral (in inconsistent ways). They foam at the mouth, attack people, attack themselves, and become utterly unaware of their own humanity. 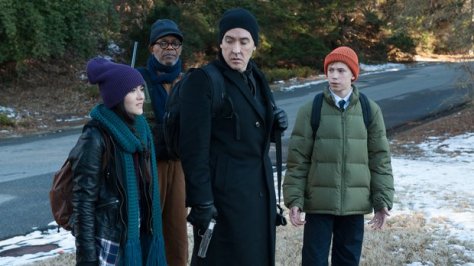 The opening shots of this film set the tone for its overall success. They hold and pan shakily over the airport bustle as blocky opening credits cover most of the frame. It is hard to see anything in this visual climate, but what we do see is an airport in which literally every person has their phone in their hands. I mean, does nobody read books at the airport anymore? Do people actually talk on their phones at the urinal?

Once the dust settles, Clay is in denial. Having just gotten off the phone with his estranged wife, and later texting her to a response of absolute gibberish, his wife is likely zombified (phonified? these zombies are called phoners). Clay, ignoring these signs, decides to go out in search for his wife and son instead of staying in his apartment where he is objectively safe. Voila, we have a movie!

After this opening sequence, the visual composition of the film levels off a bit, but it is still not particularly pretty. Edit points are awkward and sloppy. The camera, in moments of action, return to a state of frenzy. The soundtrack in these moments, too, is a loop of gurgling moans that is obtrusive and unnecessary.

Once the film breaks away from its initial conceit, which is to say when Cusack stops reminding people to not use their cell phones, the film becomes a run of the mill zombie movie. Save for the zombies becoming a living embodiment of their phones (and we thought the phones were an extension of us!), where they make inhuman noises that sound like dial-up and power down at night, they are merely zombies. The added elements are flair, and reverse the day-night dynamic of the horror genre, but they are not really interesting.

This angle Cell takes is a thinly veiled metaphor for our dependence on cell phone technology, but that doesn’t make the premise worthwhile. As the characters discuss the nature of the disease, trying to crack the code of the phone’s grasp on the phoners, nothing progresses. Given the outlandishly fantastical way of the phonies, the source and reasoning behind them should not be the central interest. The narrative is a travelogue, at its core, which would lend its hand more readily to an exploration of slice-of-life snippets in the survivor landscape. We get plenty of characters along the way but little in the way of travelogue intrigue.

The acting performances from leads Cusack, Samuel L. Jackson, and Isabella Fuhrman are fine, but it means little. The narrative drags so hard in the second act that it is easy to ignore their performances. It is easy to ignore much of what is going on, as a matter of fact. By the time we start approaching the climax, all we can hope for is an ending. We get there, eventually, but not before being subjected to a very tepid climax that attempts to achieve multiple things while succeeding at none.

Watch this instead: Pontypool