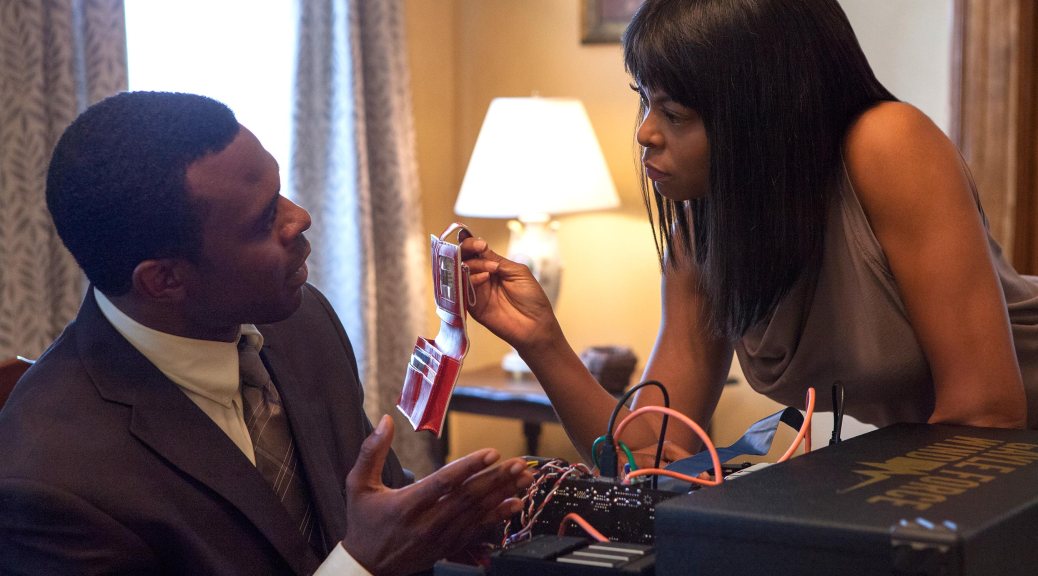 In 2013, Tyler Perry’s Temptation: Confessions of a Marriage Counselor told the soap operatic story about a woman whose life falls apart due to a reckless and ill-advised romantic relationship. With 2018’s Acrimony, Perry weaves a story with the exact same premise, frame narrative and all.

Temptation was a tone-deaf, overly dramatic tragic romance that failed on almost every level. Acrimony…well Acrimony at least has Taraji P. Henson.

Henson plays Melinda, a generally patient person with sparks of intense anger that flare up dramatically when she gets crossed. In college, Melinda bumps into Robert (Antonio Madison and, later in the film, Lyriq Bent). Their meet-cute in the rain is less sweet than one would expect. In fact, Melinda rushes past him in frustration.

All the same, they fall in love. An ill-advised love—a fact we are constantly reminded of by Melinda’s sisters. Robert is untrustworthy. He appears caring and loving, but he doesn’t pitch into the relationship. When they get married, he takes Melinda’s money without ever getting a stable job of his own.

Robert assures Melinda that his hair-brained scheme to create a battery that charges itself will take off and they can escape their meager existence. But it might not take off soon enough to save their relationship.

Acrimony is, to put it as lightly as possible, a mess. Perry has little sense of what makes a quality transition between story beats. It feels like a punchline when characters burst into the scene to baldly announce the next major plot point, but it is never intended for laughs.

The incessant voiceover isn’t meant for laughs, either. The majority of the film is told as a frame narrative, with Henson dictating to a court-appointed psychologist the intimate details of her relationship with Robert. Not only are so many of her lines squarely on the nose—in some instances pandering to an audience that Perry than undercuts later in the film—but the voiceover is only used as a means of informing what emotions the audience are meant to be feeling.

I would call this a lazy tactic, but in a film where tone is an impossible thing to grasp the voiceover was a helpful cue.

Unfortunately, Acrimony plays better for laughs than it does for drama. This is not to entirely disparage Perry’s vision. It is clear to see the emotional groundwork that he has put into the film. The characters have real goals and motivations and emotions, but none of these things are produced organically. And Perry presents them with no subtext, instead having every character say every emotion and motivation and goal that they have.

As a result, many scenes play out in ways that are inadvertently hilarious. And these scenes occur more frequently as we approach a climax that is so ill-staged and frantically paced that it feels like a last-ditch effort to keep under budget.

What works in this film are the performances that lean into this atonal lack of realism. Henson performs in this film, and it is an endlessly entertaining sight. Her immense talent allows the audience to almost buy into the radical 180 that her character takes in the third act.

Bent, too, does a fairly good job alongside of her. His character is too cartoonish for what Perry is trying to do with it, but Bent is still able to provide at least a semblance of reality to Robert with the emotion that he brings to the role.

This is not to say that the acting performances in Acrimony are good, per se, but it is at least entertaining to see Henson in this role.

Formally, the film provides very little of substance. The scene that first introduces us to Melinda in her therapy appointment is a slow track in, with Henson framed by sleek furniture. This looks good.

But most other shots look flat. Any shot that takes place outdoors looks strangely like it is being shot on green screen. Perhaps it actually is, and for whatever reason Perry did not have access to a park with a bench. Either way, it doesn’t look real.

The experience of watching Acrimony is a surreal one, mainly because it isn’t hard to see a decent, if not conventional, domestic drama at the core of this script. While you are searching for this genuine film that Perry is clearly trying to make, all you are experiencing on the surface is a manic melodrama that flails around blindly for some sort of grasp on tone or subtext.

It entertains in ways that are unintentional, at least.