David Kim (John Cho) has had a rough few years. Following his wife’s death to cancer, he has grown distant from his daughter Margot (Michelle La). So much so that he doesn’t think to worry when she’s been out of the house for over 24 hours. The worry sets in, though, when she stops responding to his texts and calls. 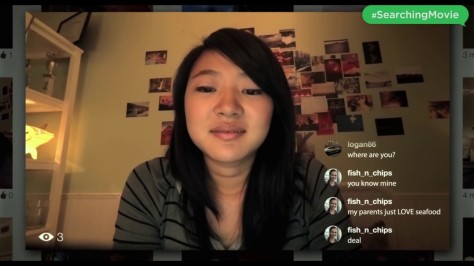 When he finally reports her missing, it becomes evident just how much he cares for her. He becomes the de facto leader of the investigation into her disappearance, using her laptop as a body of evidence from which to glean information. With the help of a detective (Debra Messing), he follows his daughter’s online activity down a rabbit hole that reveals mystery after mystery.

Searching is the next in the line of movie-screen-as-computer-screen thrillers. Following the precedent introduced by films like The Den and the Unfriended franchise, the entirety of the action is depicted via a proxy computer screen. It isn’t a static frame, as in those other horror films. Instead, the camera zooms and cuts in to highlight sectors of the screen. This dissipates the post-modern found footage artifice of the formal conceit, ultimately making the gimmick appear less pertinent.

But Searching adds a layer of drama that a film like Unfriended only pretends to have. Kim’s search for his daughter has immense personal stakes, and it is constantly evident in the body language of Cho. Unlike the vapid and self-centered characters in the Unfriended films, which offer little in personality and less in likeability, Cho’s paternal figure brims with guilt, determination, and fear. He is the main reason this film transcends earlier incarnations of this computer thriller subgenre.

In terms of the mystery, many of the twist and turns in Searching can be foreseen. Even if you don’t notice the tongue-in-cheek mascot at Margot’s high school, you can see from the people she interacts with online just what has happened to her. That is, aside from one final twist that is genuinely surprising in a pleasant way, given that going back afterwards and re-reading select scenes puts the entire investigation in a new perspective.

There are visual red herrings, however, that add to the mystery. The visual detail put into the backgrounds of the screen is engaging, as opposed to merely used to populate the digital setting. (Note, too, the cheeky reference to Unfriended in the faux Facebook app).

Searching is not a white-knuckle thriller. The computer setting can become flat, and certain sequences of evidence gathering comes off dull. But director Aneesh Chaganty does lead this procedural mystery toward an intriguing end.

He also makes a true setting out of the computer screen. It is not simply a tool for destruction, as in Unfriended. It is a place in which lives are stored and memorialized. The film opens with a montage that traces the Kim family through the years. The technology that displays the memories grows and adapts just as the family does, depicting a generation whose livelihood is integrally tied to technology. As much as technology can be a place of fear—I am perhaps pressing this Unfriended comparison too hard, but the contrast in tone is apt here—it is also a place of connection and joy.

Searching is not a technophobic film, but one in which technology is a living entity. It fluctuates in import depending on how it is used. A film like Unfriended: Dark Web makes a nihilistic hellscape out of its depiction of the internet. Searching makes the internet a tool used equally for good and bad. It is a nuanced landscape, a tool as opposed to a plot device.

In this way, Searching is a fascinating examination of modern day criminal detection. It also serves as a platform for Cho, who makes a highly internalized case study out of his protagonist. As a mystery thriller, it is not the perfect exhilarating experience that it may want to be—there is a literal U-turn at the climax that just feels too neat. But it is the first film to give repute to the computer thriller genre, proving that it can be used for more than low-brow scares.

All things considered, the use of technology in this film can at times be rather ludicrous. Would a police detective really use FaceTime as a means of communicating with her client? Just saying.