The Predator is proof that 1980s action movies cannot be made today. Cult favorite Shane Black and his writing partner Fred Dekker have concocted a sequel-reboot stuffed to the ears with the worst of ’80s action tropes. But at least there’s an alien in it, right?

The Predator makes abundantly clear the premise of its franchise. Characters repeatedly call the larger-than-life alien “The Predator,” while also quickly commenting that it is more of a game hunter than a predator. The Predator is not killing to survive; it kills for sport.

This particular Predator crash lands in the South American jungle, where a United States military unit led by sniper Quinn McKenna (Boyd Holbrook) stumbles upon the downed spacecraft. After the heavily-armed alien takes out the rest of his crew, McKenna steals some of its tech to prove its existence.

Despite this move, McKenna is arrested by the military and put on a bus in route to military prison. Here he meets a colorful crew of soldiers, all of whom are being bused to prison for some sort of mental break. Meanwhile, Will Traeger (Sterling K. Brown)—the officer that imprisoned McKenna—aims to research the Predator with help from scientist Casey Bracket (Olivia Munn).

What ensues from here is a first person shooter with the occasional alien sighting. A surprising amount of action is dedicated to soldier-on-soldier violence that is handled in the script with a cheeky grin but mostly comes off distasteful. Of course, one must expect the body count in a Predator film to be high. Given that this is the fourth film in the franchise, the body count must be higher still.

And sure, there is creativity in how the Predator chooses to gut, maim, and de-spine people. But these sequences are less frequent than the ones in which humans rain gunfire on each other, a conceit that does not require the Predator franchise tag nor any sort of creativity.

This is not to say the violence is what does this film in. The violence is what makes these films possible. What foils The Predator is Black’s insistence on reverting to 1987 in all manner of things without considering advancing what one can do with a Predator film (or an action film, for that matter).

The same motley crew of characters exists in Predator, more or less. Not in that they fill the same archetypal roles, one-to-one (although the relationship between Keegan-Michael Key and Thomas Jane is reminiscent of the one between Jesse Ventura and Bill Duke). But in that Black did punch-up on the script of Predator, and the same crass humor and insufferable machismo exist in this film.

There is nothing inherently wrong with characters having foul humor or a penchant for hyper-masculinity in your action flick, but The Predator comes off as highly reductive in this regard. It is a movie that feels like it is from the 80s, made in 2018, that seems to not have any awareness of what has happened in the interim to film and culture.

For how stereotypically masculine the characters act, the cast, particularly our lead Holbrook, seems to be playing it straight. If Black is making a throwback to 80s cinema with a self-aware wink, that is lost somewhere in his blind affection for that period. If he is making a light-hearted, bloody romp with no care for character representation, it suffers from the characters he wrote.

With Holbrook as our bland, milquetoast hero, every other character fills a tired role. Roles that were tired decades ago, mind you. The loud, crass comic relief character (Black himself played this role in Predator). The half-jokey, half-dead-behind-the-eyes sharpshooter with a death wish (Black wrote this role for Mel Gibson back in the day).

The criminally sidelined sole female character, who provides one active contribution to fighting the baddie (staged as if it is a surprise reveal that she is doing something helpful) but otherwise protects children or gets saved by the big strong man. I figured Hollywood would have retired this character into the rafters with the other terrible character archetypes of history. Oh, well.

At least there is an offensive depiction of Tourette syndrome. Because isn’t that hilarious? And how about a depiction of Asperger’s solely utilized as a plot device? That could never go wrong!

Some of these characters wouldn’t be as problematic if they were interesting. But as written they are empty husks of people spitting out Shane Black dialogue dictated by good actors trying their best to give life to lifelessness. That we sit in scenes where they explain themselves or their situation at length makes it crystal clear just how vacant these characters are.

None of this matters when the Predator shows up, because the script clearly puts most of its creative energy into how a space alien can butcher the human form. We don’t have strong allegiance to the characters, thanks to their hollowness, so I guess we can always root for the bloodthirsty monster.

Then again, Black tarnishes the mystique of the Predator by allowing us to understand their language. They speak with boring, almost businesslike diction, as if they don’t even want to be doing this. If the giant alien super-killer is bored, how am I supposed to be excited?

The Predator has its glimmers of fun. Bullets are discharged. Targets are “lit up.” People are shredded, diced, and all sorts of f-ed up. But at the core, there isn’t a lot of life to this thing. Predator used the machismo energy of characters to good effect. Predator 2, even though it has a lot of wacky elements to it, at least maintains a sense of liveliness. The Predator has a lot of scrappy, messy action sequences, but it comes off out-dated and flimsy.

As much as this action can succeed at pandering to the casual action movie fan, The Predator is more of a comedy than the sci-fi-horror-action hybrid that the franchise is known for. And most of this comedy is groan-worthy, at best. Regardless, the film has the potential of being an empty experience to all but the most ardent Predator fan. 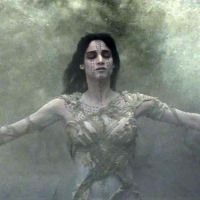