Lizzie Borden was a notorious figure. She was a news sensation long before the 24-hour news cycle was a germ in Ted Turner’s head. In 1892, Borden’s parents were murdered with an ax, and she was the prime suspect. It was a big deal. I mean, you know you’ve struck a cultural nerve when children skip rope to rhymes of your homicidal exploits.

Congratulations, Lizzie. You made it. They even made a movie dramatizing your life. Again. 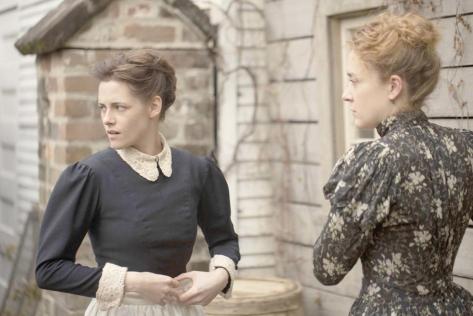 Craig William Macneill’s version of events in Lizzie is intended as a pot-boiler, tension simmering amid a terse domestic drama that boils over rapidly in the climax. On both accounts—simmering and boiling—things feel undercooked.

Borden is played with a stoic poise by Chloe Sevigny. She appears perfectly cast, but she is somehow underutilized in spite of her title role. Screenwriter Bryce Kass is clearly trying to move past the simple titillation of the murder (despite depicting its immediate aftermath thrice in 105 minutes).

Attention is instead paid to Borden’s relationship to her oppressive father (Jamey Sheridan) and step-mother (Fiona Shaw), as well as the new family maid Bridget (Kristen Stewart). Lizzie’s rebellion against her father is compelling throughout and should serve as the driving through-line.

When the script pivots to the wishy-washy depiction of a love affair between Lizzie and Bridget, it loses the courage of its convictions. Lizzie becomes a different personality. The two women do not engage in a way that is indicative of chemistry. The relationship just kind of happens, without ever really happening at all. From the final scene between the two of them, it is clear that the film is attempting to illustrate a conflicted resolution to an intense relationship. But there is no intensity on the screen.

Bridget, similarly, is not a character the audience gets access to. She also becomes the subject of the household’s paternal abuse, yet the film doesn’t attempt to engage with the emotional fallout of the heinous acts. Bridget instead remains a static character, a fly on the wall that observes Lizzie’s actions.

Lizzie’s sister, Emma (Kim Dickens), is also a shallow character. Introduced in the background of a long shot, it seems as if she is not important to the narrative. Once she does have something to say, then, it is difficult to gauge what her motivations are. She becomes a crucial part in the aftermath of the murder, but her character is flattened from lack of exposure.

With these bland characters walking around with morose looks on their faces, the tension reads turgid. When the climax hits, it feels like characters sleepwalking through a procedural reenactment. Because the event is a foregone conclusion from the onset, Macneill throws in images of excessive violence and nudity to chill the audience. But this graphic climax feels like a tonally disparate footnote to a dreary drama. It trudges on to slowly build dread, but it mainly just feels slow.

Lizzie is armed with a well-known, inherently engaging story. But it doesn’t do much with it. Sevigny pulls off a compelling performance, but nothing else in the film lives up to it. The film avoids being a gratuitous case study of murder, until it doesn’t. Neither side of that line functions as a high point of tension, and together they work to sink each other even further away from thrilling.