My favorite film of 2018 was Chloe Zhao’s The Rider. It is, in my mind, a transcendent experience of intimacy and empathy whose connection to reality enhances its visceral, heartfelt case study of cowboyism.

While watching Laure de Clermont-Tonnerre’s The Mustang, I couldn’t shake the memory of watching The Rider for the first time. Both involve plot mechanics involving horse training and thematic notions of disillusioned masculinity. They both attempt to take a quiet, restrained look at one man’s emotional growth, as well. 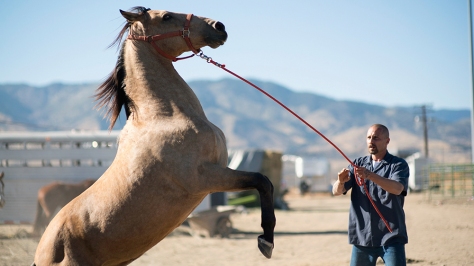 When it comes to analysis, a comparison of the two films will only get one so far, and I do not hope to judge The Mustang on the merits of a film that I believe holds the A-standard for films of this type. But the more I was exposed to the repressed aggression and quiet inaction of inmate Roman Coleman (Matthias Schoenaerts), the more I longed for Brady Jandreau’s similarly quiet exploration of his character’s similarly tumultuous place in life.

The Rider benefits from its place as a fictional refraction of a real-life situation. Jandreau’s performance is benefited by his knowledge of how his fictional character relates to his real-life past. The Mustang, in a few key ways, eschews reality. For one, the scenes of horse training contain visible seams, where you can see the horses reacting to a trainer off-screen guiding them.

It also places its character in a prison system that seems other-worldly. Coleman, a violent criminal, is given plenty of latitude to do what he pleases within the prison. His occupation as a worker at the horse corrals (located just outside of the prison) allows for him to be entirely on his own. In one key scene, a group of prisoners working for the manager of the corrals (Bruce Dern) are allowed to be outside at night sitting around a campfire with supervision that leaves them alone to find their way back to their cells.

These breaks from reality are superficial and semantic, yes, but they are part of what colors the film as a lacking look into a man’s journey to reform. His prison setting, which is depicted rather stereotypical save for the novel horse training aspect, does not enhance his character development; if anything, it hinders it significantly. For a large section of the third act, Coleman becomes beholden to his aggressive cellmate, a subplot that yields nothing and leaves Coleman utterly unchanged, yet it is a subplot that takes up a large amount of screentime.

What is intentionally built into the narrative is that the horse training is the key point in Coleman’s progression. This is where he is meant to learn empathy, learn how to allow people into his life, and learn how to fix the things in his life that he has broken. The script points to these changes—Coleman does progress from an emotional disposition that leads him to punch a horse to an emotional disposition where he lets a horse nuzzle its head against his—but the narrative itself never really indicates that the plot of the character leads to the change he sees.

Case in point, what serves as the climactic scene of the film is shot to highlight an emotional apex of the character’s arc—we know this becomes the action switches to slow motion at a turning point in the scene. But the ramifications of this scene do not hit with the emotional punch it appears to be going for. The following scene accomplishes this emotionality slightly more effectively, but it is all in favor of a simplistic metaphor (the horse is in a cage, and so is he!) which comes off trite.

The character’s arc becomes clear very early on (the scenes containing those lines all occur within the film’s first half hour), and knowing the destination so early makes watching the character almost silently drag his feet toward that destination a disappointing experience. Coleman must learn how to break a horse, become its companion. The result will be, inevitably, that he will learn how to free himself from the figurative shackles that bind him (the tragic irony will be, we are certain, that the literal shackles will remain). While the final narrative beat introduces a wrinkle to this simple relationship between horse and man, it comes too little too late to provide complexity to the themes at play.

Schoenaerts does an admirable job embodying this very internal character. The snaps of aggression he presents feel true to the character, while the quiet moments of reflection do not come off as comparatively disconnected. He captures a person at both an internal and external crossroads who does not know how to emotionally handle such a radical shift. It is the character itself which is lacking.

The supporting cast is given no favors in this script, either. Bruce Dern’s entire performance consists of standing in front of a group of inmates and shouting orders. There is no room there for Dern to act, really. Jason Mitchell, as a fellow inmate who trains Coleman to become one with the horse, is given more to do. He is a lively presence in this otherwise low-energy exploration. And Gideon Adlon, as Coleman’s daughter, is given a couple of emotionally heavy scenes. The unfortunate part is that her dialogue is some of the most clunky, so, in spite of her performance, the character is given no life.

There is a story to enjoy in The Mustang. The true-to-life concept of inmates being rehabilitated by helping train and auction off mustangs who would otherwise be put down is intriguing. But the novel real-life conceit is not matched by a novel case study of rehabilitation. The person-horse relationship comes off rote. The prison narrative comes off cliched. The personal story of redemption, which is the most promising, is ultimately unfulfilling. The result is a film with high aspirations and low yield. 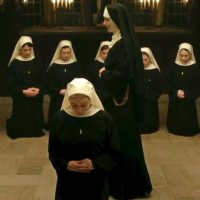