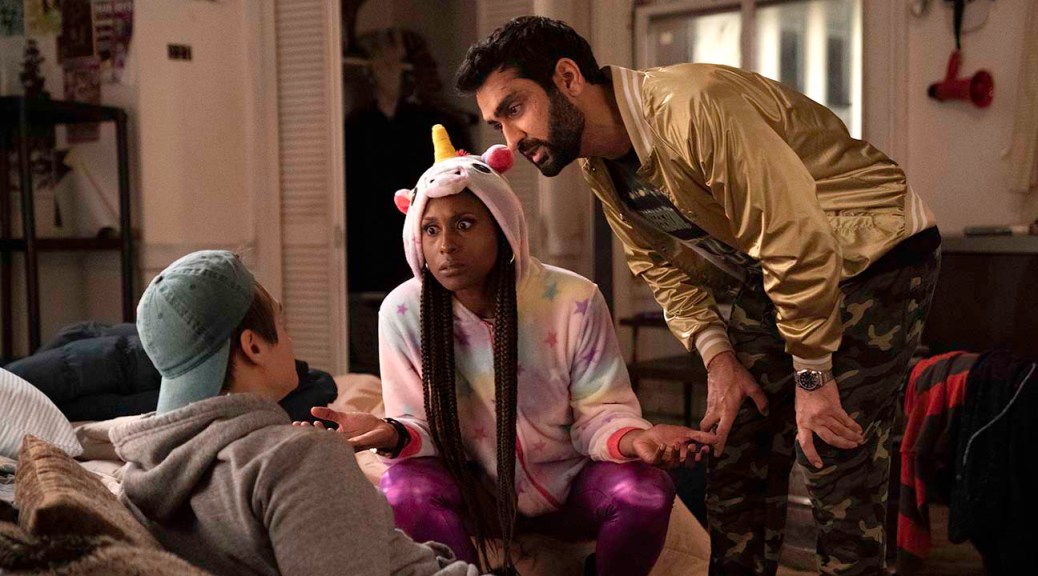 Jibran (Nanjiani) and Leilani (Issa Rae) meet at a party and really hit it off. We watch as their relationship flourishes, and seemingly nothing could go wrong. These two were meant to be together forever. Cut to a few years later, and their relationship is on the ropes, getting body-blows from arguments as superficial as whether or not The Amazing Race constitutes quality television.

Just as soon as their relationship ends, they hit a cycling pedestrian with their car. A man claiming to be a cop then commandeers their vehicle, proceeds to commit brutal vehicular manslaughter on the cyclist, and flees the scene. Leilani and Jibrani, now thinking that the police will be after them for the murder, seek to find the killer themselves to clear their names.

In many ways, The Lovebirds is a madcap screwball comedy that also wants to exist comfortably alongside crime film pastiche. With an added layer of romantic earnestness on top for good measure, this generic combination is fairly intriguing. For the most part, these parts do coalesce into a functional whole, allowing for a film that runs at a decent clip. The issue is that the comedic content housed within this genre hybrid conceit just doesn’t cut it.

It is a shame, too, given the powerhouse potential of the film’s two leads. Rae and Nanjiani have an effortless comedic charisma that is difficult to dismiss, and the film certainly benefits from the pair’s presence. The material oftentimes simply does not rise to meet them. A few scenes manage to highlight their strengths, like the one where the pair, at this point physically and mentally beaten down by the day’s events, arrive late to a party and begin improvising a lie about boxing.

Showalter, too, shows a comedic deftness behind the camera in small moments. A scene where Jibran and Leilani break into an apartment to find a group of frat boys aiding in a blackmail scheme provides some effective use of foreground-background relations.

There is a lightness to the pacing of The Lovebirds that allows it to go down easy, but it is ultimately a forgettable vehicle. With great leads and a more-than-capable director, the potential of this film outweighs the results. The script does not provide consistent humor, putting forward plenty of out-dated references but rarely a genuinely clever joke. It does better work fleshing out a grounded relationship for its eponymous pair, but even this falls short of emotional effectiveness.

One thought on “The Lovebirds (2020) Movie Review”