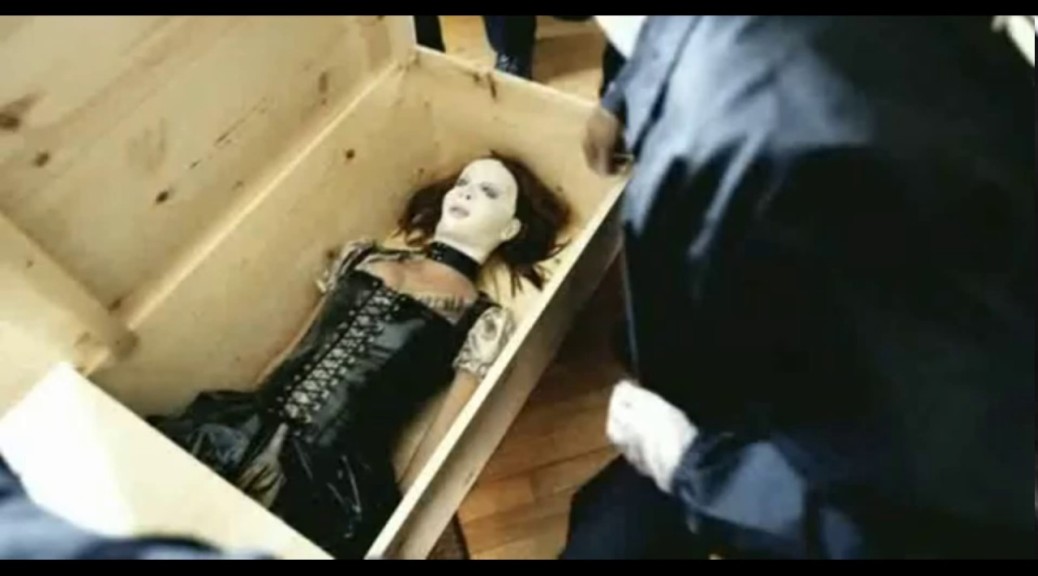 Over the past decade, The Poughkeepsie Tapes has become an artifact of horror fandom lore. Initially set for a 2007 release, John Erick Dowdle’s mockumentary profiling of a serial killer was pulled from the release slate and faded away.  In 2014, the film received a light VOD release and vanished again.

On October 10, 2017, The Poughkeepsie Tapes was given, for the first time, a proper release. It is currently available on DVD and Blu-Ray.

In retrospect, the film feels like the found footage love child of The Blair Witch Project and V/H/S. Talking head interviews frame the story of a serial killer who kidnapped women and taped his terrorizing sessions with them, saving all of the VHS tapes in a large stash in his home.

Aside from the heavy distortion on the VHS footage, so severe that it continuously shifts color and warps in heavy waves, the film does succeed in having a layer of reality to it. It feels like a tried-and-true documentary of a notorious killer, like something that would show up on Dateline NBC.

While discussing retrospection, the film as released in 2017 feels like another in a long line of found footage genre pieces. In 2007, however, The Poughkeepsie Tapes would have been released over a year prior to Oren Peli’s breakout success Paranormal Activity reaching a wide US audience.

Except, this isn’t 1960. Censorship-wise, this film is allowed to do much more. The film has its grisly moments, as well as its unsettling images of stalking that feel ripped right out of a Friday the 13th sequel. But it doesn’t rely so heavily on slasher imagery to make its case as a horror film.

Instead, the film weaves a suspenseful, almost picaresque narrative out of its villain. The killer appears to be setting out to not just kill, but to create. He does not merely attack his victims. He breaks into their house, moves around their stuff to craft adequate production design, sets up the camera and then hides, allowing the victims to be filmed as they live before he attacks.

In a sense, this killer is a horror movie director of his own. He has a “bizarre sense of theatricality,” as one character in the film describes it. The film continually dips its feet into the well of the perverse, but it is doing so, seemingly, as a commentary on voyeurism and horror fandom itself.

This is by no means the first film to present such a message about its own audience to its audience. Michael Haneke’s Funny Games is a film that comes to mind, and undoubtedly does the job more eloquently.

Still, The Poughkeepsie Tapes succeeds in what it sets out to do. It is unsettling, and it implicates the audience in everything that is happening on screen. As the audience, then, we are left in a confused state of voyeuristic guilt.

As intriguing as the film is, the most interesting element is its existence in the horror landscape. It is a node in a long chain of films like it, but also appears to be ahead of its time in many respects. Watching the film brings to mind many other films in the genre, for better and for worse. In a way, this makes it hard to see the film as its own entity. Its history precedes it.

Nevertheless, with its home video release there is no excuse for a horror completest to miss this film. As much as found footage has gone by the wayside, garnering more derision than sympathy, The Poughkeepsie Tapes still feels fresh ten years later. Not to mention it remains director John Erick Dowdle’s best work to date.

The Poughkeepsie Tapes: B+