Becky, from directors Cary Murnion and Jonathan Milott, is about as barebones as a thriller can get.  A group of White Supremacist prison inmates are being transported down a county road when they spring a plan to break out. The mastermind behind the plan, Dominick (Kevin James), leads them to a lake house in search of a mysterious key. But they come up against the obstacle of a family spending the weekend at the house—a father (Joel McHale), his daughter, Becky (Lulu Wilson), his girlfriend (Amanda Brugel) and her son (Isaiah Rockcliffe). 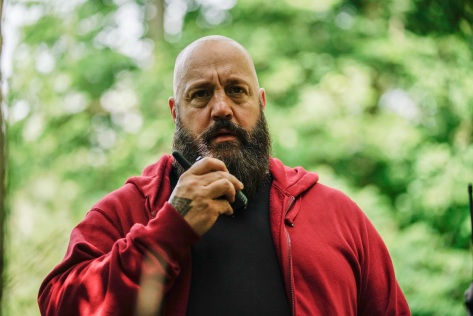 The bloody mayhem that unfolds from this straightforward plot is almost flippantly brutal. Dominick and his cronies will not let anyone or anything get in the way of their ill-defined goal—this includes children and dogs (I know this is a minor spoiler, but I feel the warning is warranted, even if these transgressions occur mostly off-screen). That this all is carried out workmanlike and matter-of-fact by Dominick, and that the filmmaking allows for this workmanlike carnage to ensue with only the briefest of pauses for emotional ramifications, causes the stakes to be lessened.

There is something to be said for this brand of brute force narrative. The lack of sugar-coating allows for the eventual grit and industriousness of Becky to shine through when she starts turning the tables on her pursuers (this isn’t the slapstick stylings of a Home Alone movie). All the same, it packs a gory punch to no meaningful end. The characters are thin and are not given ample time to establish the emotional stakes so that we might feel the weight behind the bloodshed.

What is likely the most marketable feature of the film—the fact that this is Kevin James’ first leading dramatic role—is surprisingly its best feature. What reads at first blush as a gimmick, stunt casting to draw in more eyes, is anything but. And while this is Wilson’s show to run—she runs it admirably, I might add—James brings a proper amount of menace to the role. Truly, this is unlike you’ve ever seen Kevin James before.

That said, the adeptness of the two poster performers can only do this movie so many favors. In the end, Becky falls under the weight of its own violent simplicity. As a critic who can enjoy a good gory title now and then, you can rest assured that this is not a case of decrying a film for its violence. It is just that the script reaches for something more than exploitation film violence and comes up noticeably short.