The extra-textual more or less fuels Hollywood at this point. Intertextuality and metatextuality exists in all manner of blockbuster cinema. And this certainly bleeds through to the audiences. Even casual moviegoers have become intimately aware of the larger, interconnected puzzle that makes up the Marvel cinematic universe, enough so that Spider-Man: No Way Home is released not as some esoteric nerdcore comic book movie which only the most knowledgeable fans are able to follow. No, it is one of the most profitable films ever, regardless of pandemic concerns. 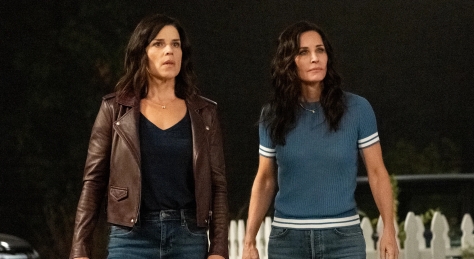 This is not to discredit audience literacy over the way Hollywood functions, of course. And the self-referential, metatextual, etc. has been around in cinema for far longer than some might think. It is just an interesting case when the self-referential is stampeding through the gates as it has been in the past two months—No Way Home, The Matrix Resurrections, and now Scream (2022). Out of the three, I think Resurrections is the most savvy with how it handles its own meta (even if the second half of the movie sort of crumbles under its own weight), but I think Scream is the most entertaining film experience of the bunch.

Scream 5 returns us to the town of Woodsboro and introduces us to a new group of high school teens who will be stalked and attacked by a killer in a Ghostface mask. After her sister is stabbed and hospitalized, Sam Carpenter (Melissa Barrera) returns to the small California town with her boyfriend Richie (Jack Quaid). It is soon revealed that a secret from Sam’s past intimately links her to the original Woodsboro murders, and the string of new murders which ensue draw the survivors of the 1996 crimes—Dewey Riley (David Arquett), Gale Weathers (Courtney Cox), and Sidney Prescott (Neve Campbell)—back to where it all began.

The film benefits from its franchise’s legacy of popularizing the meta-horror, a subgenre which continues to make its presence known in the larger horror ecosystem. The major and most glaring difference with this fifth installment is the absence of the franchise’s creator, Wes Craven, and its screenwriter, Kevin Williamson. The latter stays on as a producer, but the creative responsibilities have been transferred to directors Matt Bettinelli-Olpin and Tyler Gillet and writers James Vanderbilt and Guy Busick.

All four were involved in 2019’s raucous horror comedy Ready or Not, an imperfect, bloody ride of a Most Dangerous Game send-up. The dark comedy therein made them appear a good fit for the soft reboot/sequel Scream (the movie itself calls it a “re-quel;” not my personal favorite terminology). And while I dare not besmirch the name of Craven when discussing the late-great’s own intellectual property, but Bettinelli-Olpin and Gillet manage to concoct a slickly-shot whodunit which, I think, gives most of the Scream sequels a run for their money.

Of course, it will be easy for detractors to toss this aside for its cheesy, long-winded writing (which I freely admit really leaves no room for subtlety) or its overly-winking nature. But if you are buying a ticket to a Scream film, this is what you are signing up for. When one revisits the original 1996 film, some of the references and lines of dialogue do come off hokey or overcooked, but the film still serves as a legitimately entertaining slasher coming at a time when the glut of slashers was getting stale and boring.

The original Scream is a one-of-a-kind movie, which is why even 25 years later its irreverence toward its own genre makes it ripe for another go around the streets of Woodsboro. Part of this is due to the staying power of horror itself. As horror continues to evolve with audience tastes, new avenues open up for a series like Scream to poke fun at (in the case of this movie, the polarizing trend of elevated horror gets its fair share of razzing). But we should ask ourselves why this franchise continues to (more or less) work well, while the horror parodies like Scary Movie and A Haunted House became the butt of the joke themselves.

The clear answer is that Scream is able to tow a fine line between parody and homage, both toward the horror genre and its own identity as a long-standing franchise. Scream 4, which many defend but I find to be the only mediocre entry in the series, stumbles a bit in this department, as its humor feels more like parody shtick than self-deprecating meta-critique. In this new entry, the jokes are firmly re-centered at the absurdity of Woodsboro’s decades-long serial killer problem, while also pointing the finger at more topical concerns like that of toxic fandom.

I can see these jokes being a point of contention, even among the franchise’s fans. The toxic fandom idea is one put too squarely on the nose, particularly at the end. And meta-jokes about Hollywood sequalizing and elevated horror do come off a bit passé. But there is enough cleverness in the script, not to mention love for its characters, to keep the film afloat in a way that virtually no straight parody can achieve. To put it another way, the irony does not undermine the plight of the characters, and as a result one can feel the danger and laugh at it simultaneously.

It also helps that the film moves at a steady, cruising pace. And it is shot with a precision that allows the viewer to constantly be aware of the entirety of the space that is in the frame. The camera, the blocking, and the editing synergize to cleverly keep attention rapt on what may (or may not) be lurking in the background, or behind the refrigerator door, or just out of frame. This sounds like a simple task, but most horror movies get this wrong. Bettinelli-Olpin and Gillett, instead, use it to their advantage for both comedy and tension. Although, the most obvious use of these tricks involves a long comic bit where one expects Ghostface to appear, but it does not happen. Here, the score is used too prominently, which calls too much attention to the comedy in a way that deflates the entire scene.

On the whole, though, Scream is witty and exciting. Like any good slasher, it keeps you guessing and makes you wonder just where the killer will pop out next. It does right by its legacy characters, while also legitimizing the inclusion of new characters at center stage. This film is rewatchable, and a fun theater experience (if that is something you are comfortable with right now). Scream marks a strong kickoff to 2022 at the movies.