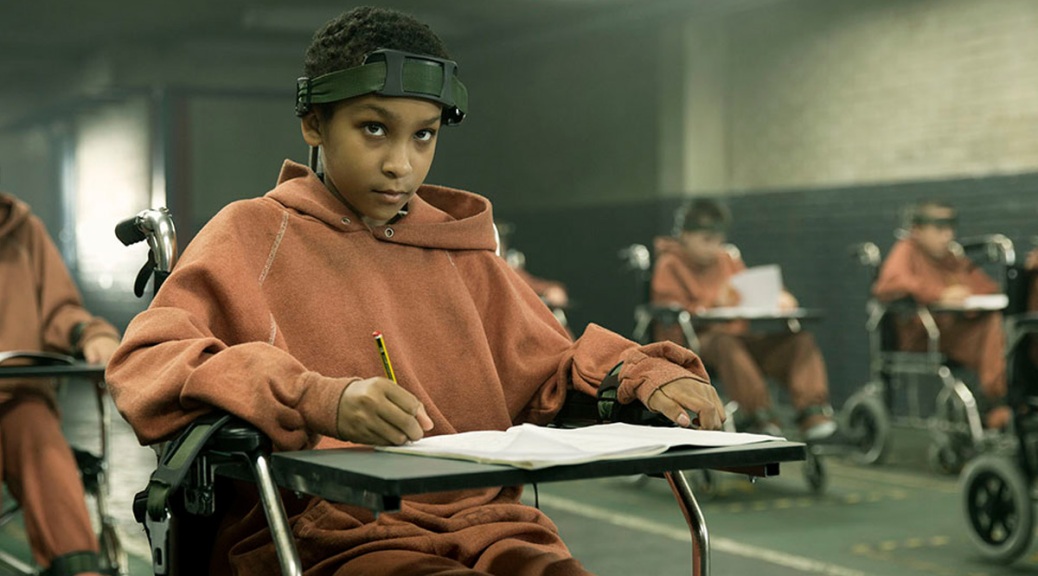 Melanie (Sennia Nanua) is confined to a cell. She must strap herself in to a wheelchair at gunpoint before she can leave it. She is kept under close, militaristic watch. She is dangerous. And she is also a child.

In a secure compound, children like Melanie learn by rote during the day and are held in lockdown at night. They are test subjects for a cure to a fungal infection that has ravaged the world, causing England to become a dystopian wasteland. The infection causes people to turn into “hungries:” feral, flesh-eating monsters that respond to the smell of humanity.

Essentially, they are zombies.

The Girl With All of the Gifts tries to complicate the zombie genre by adding narrative wrinkles about what makes people human. At first, the film centers on these wrinkles. Melanie is questioned with logic problems like Shrodinger’s Cat, a problem in which the state of living or dead is in uncertain flux. Melanie, quite obviously, is this cat. She is infected with this virus, yet she acts with extreme compassion.

Her very existence is the question mark of the film. How we are meant to view her as an audience should be the crux of conflict. And yet, it is painfully obvious who is good and who is bad. Melanie, albeit sick, is clearly a sympathetic character.

As the film progresses, we move further away from this thematic redux of zombie tropes and settle into what is by and large a standard zombie film. There remain small upticks of compelling changes to tired formula, as in when a zombie mother continues pushing around her baby’s stroller as if nothing has changed, but even this has been done before.

The film is a refresher on Romero. The zombie genre having run its course save for a few exceptions, the best The Girl With All the Gifts can hope to do is come off vibrant and new.

And it does. Wonderfully shot, the film constantly keeps the eyes working, following tracking shots or anticipating the result of a push-in or pull-out. One shot in particular, early on when the inciting incident occurs, perfectly utilizes foreground and background space to create a gut-punch of a moment. To some, the film is worth it for this shot alone.

There is a lot to like in The Girl With All the Gifts. For a zombie film, the acting is stellar. Not only from Glenn Close, but from the rest of the roster as well. And the young Nanua carries the title role very well.

Stylistically, the film carries many scenes to their conclusion using compelling blocking and shot structure. Not to mention that haunting underlying score.

The narrative, too, provides enough twists and turns to entertain a zombie enthusiast. The film doesn’t break new ground, but it has enough life to keep it from being reminiscent of the Shrodinger’s Cat conundrum. However, like Schrodinger’s Cat, it’s still a cat once you open the box. Living or dead, it’s the cat that you expected.

The Girl With All the Gifts: B