This review of Pascal Laugier’s Martyrs and its 2016 remake is part of the New French Extremity Retrospective series.

Note: This review goes into spoilers for both films. You’ve been warned.

Pascal Laugier’s 2008 film Martyrs is perhaps the crowning achievement of the New French Extremity, as it ties together the disparate themes and generic components of the movement in the most cohesive and intriguing way.

The American remake of the film, directed by Kevin and Michael Goetz and distributed in part by Blumhouse, is not in conversation with the films and filmmakers of the New French Extremity. It is entirely removed. As such, it is merely an exploitation film.

Now, Laugier’s Martyrs is no walk in the park when it comes to excessively violent subject matter. But for most of its running time it doesn’t feel like an exploitation film. It is a film about irreconcilable grief and PTSD, a torment that shreds a woman to the brink and grays her own humanity.

Laugier’s film also toys with narrative structure in fascinating ways, making us constantly on edge, constantly questioning our alliances and our stake in the story that is playing out. We don’t really know who Lucie (Mylene Jampanoi) is when she bursts into a household and starts quickly offing the nuclear family inside. The film works against the current to convince us after the fact that Lucie is a tragic figure.

This works in effect because the film focuses on the perspective of Anna (Morjana Alaoui), Lucie’s only friend. We see Lucie’s psychic tension from the outside. Martyrs 2016 starts with us seeing things through Lucie’s (Troian Bellsario) eyes as she grows to confide in Anna (Bailey Noble). This section in the American version not only slows the film down, as it is noticeably longer, but it forces our alignment with a character that will go on to do terrible things. There is no struggle or ambiguity, there is merely a script that we see play out on screen.

Take the first few shots of the film. In the French film, Lucie breaks through the threshold of the building where she was kept imprisoned and sprints through the street. Her clothes are barely intact, her hair is shaved, and she is bloodied and bruised. There is an inhuman appearance to her. From her mouth comes whimpering gasps of desperation. We can feel her struggle from the first moment we see her.

In the American film, we see her break through a draped curtain and run out the door. Then, police arrive. That’s it. It is not only sanitized, but it is vacant. 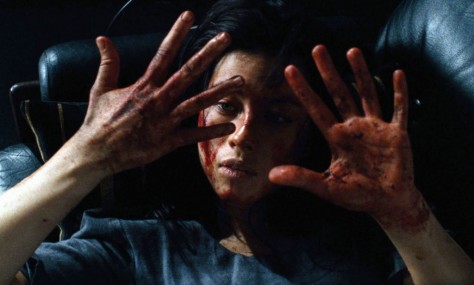 Seemingly, the American film misses the entire point. It expedites where the French film fantastically elongated. It lengthens in areas where further study is not necessary. And it plays its characters’ emotional states and narrative arcs in entirely the wrong way.

For Laugier, Lucie is hesitant but determined to get vengeance for her suffering. In both films, she pauses before killing the children of the family, as it is unclear whether or not they knew of their parents’ transgressions. But in Laugier’s film the emotions are more muted during the attack, then they spring to life after it is over. In the Goetz’ version, she is on the verge of tears the entire time. Her emotions are not a trajectory, but a static line throughout the scene. This results in a more static scene.

Then there is Anna. Her conflict in the film is the most awesome to behold. She cares so much for Lucie that she is willing to come to her aide when the killing is done. Even as her own sense of morality comes into play, she is never willing to abandon the person she loves.

At least, in the 2008 film this is the case. The first time we see Anna in the 2016 film, post-murder, she takes one look at Lucie and runs off. Not only does this undermine her entire character, but it also leads to the nonsensical when Anna returns to the house later with no explanation for her change of heart.

It feels like the Anna in the 2016 film is afraid of Lucie. When she helps the injured matriarch of the family try to escape, Anna seems afraid of death herself. Indeed, when Lucie notices this, her entrance into the scene is a jump scare.

Cinematically, the two films are rather similar. The 2016 film plays a lot of it as a 1-to-1 relationship (up until a point, at least). The murder scene, for example, looks practically the same. As such, it is one of the most engaging scenes in the 2016 version.

But small tweaks show the 2008 film to be superior. Most of the changes are minor cinematographic ones, like the glimpse of Lucie’s psychological manifestation in the kitchen accompanied by a whip pan which restricts our view of the monster.

In the 2016 film the monster is seen plain as day, and it looks pretty silly.

Perhaps it is unfair to judge Martyrs 2016 on what it is remaking. But without the original as a guide, the film would come off entirely nonsensical. Anna’s motivations fluctuate at a moment’s notice to satisfy the narrative beats of the original. The presence of Lucie’s past is never really felt inside the house. The murder comes off like the outburst of a psychotic person rather than the conflicted act of vengeance that it truly is.

It is necessary to bridge the remake to the original. Without the original, the Goetz’ Martyrs is nothing. Unfortunately for them, with the original their film is even less. It is a miscalculation. It takes what makes the 2008 film such a cult favorite and normalizes it. Waters it down. Martyrs 2008 may not be a masterpiece—its lengthy imprisonment sequence in the latter half is excessive for what it tries to put across—but it looks like one in comparison.

The structure of Martyrs is fascinating. How it is paced and how things are revealed make it labyrinthine, begging for rewatches so that one can grasp the thematic material that is much loftier than the horror genre generally is. It takes a bold stance with its two protagonists, a boldness that is cowardly avoided in the 2016 film, causing any potential for meaningful character arcs to go out the window.

Neither of these films are easy films. Both go to brutal lengths to depict the depraved world that causes the characters’ suffering. But only one of the films brings the viewer out the other side with something worth taking away, something worth the torture. One shows the reach of humanity even as it outstretches deep into the realm of the inhumane, showing the faintest glint of hope in a world of bleak darkness.

The other is a horror movie.