Chris McKay’s The Tomorrow War feels like a remnant of the ’90s, a stray fragment of sci-fi blockbuster flotsam that somehow landed on post-COVID streaming in 2021. Independence Day. Aliens. All the usual suspects of ’80s-’90s alien warfare action exist in the bones of this money-splattered-on-the-screen popcorn flick. And some Edge of Tomorrow (itself a far more successful throwback) thrown in. And maybe some Starship Troopers if you squint a little, minus the raw, biting satire that makes that film so special.

McKay—who has made a career directing, editing, and doing VFX on animated projects in The LEGO Movie franchise and on Adult Swim shows Robot Chicken and Morel Orel—makes his studio live action debut with The Tomorrow War. Undoubtedly, it is the biggest budget project in his list of jobs. It is also the most programmatic, generically vanilla project in the bunch. 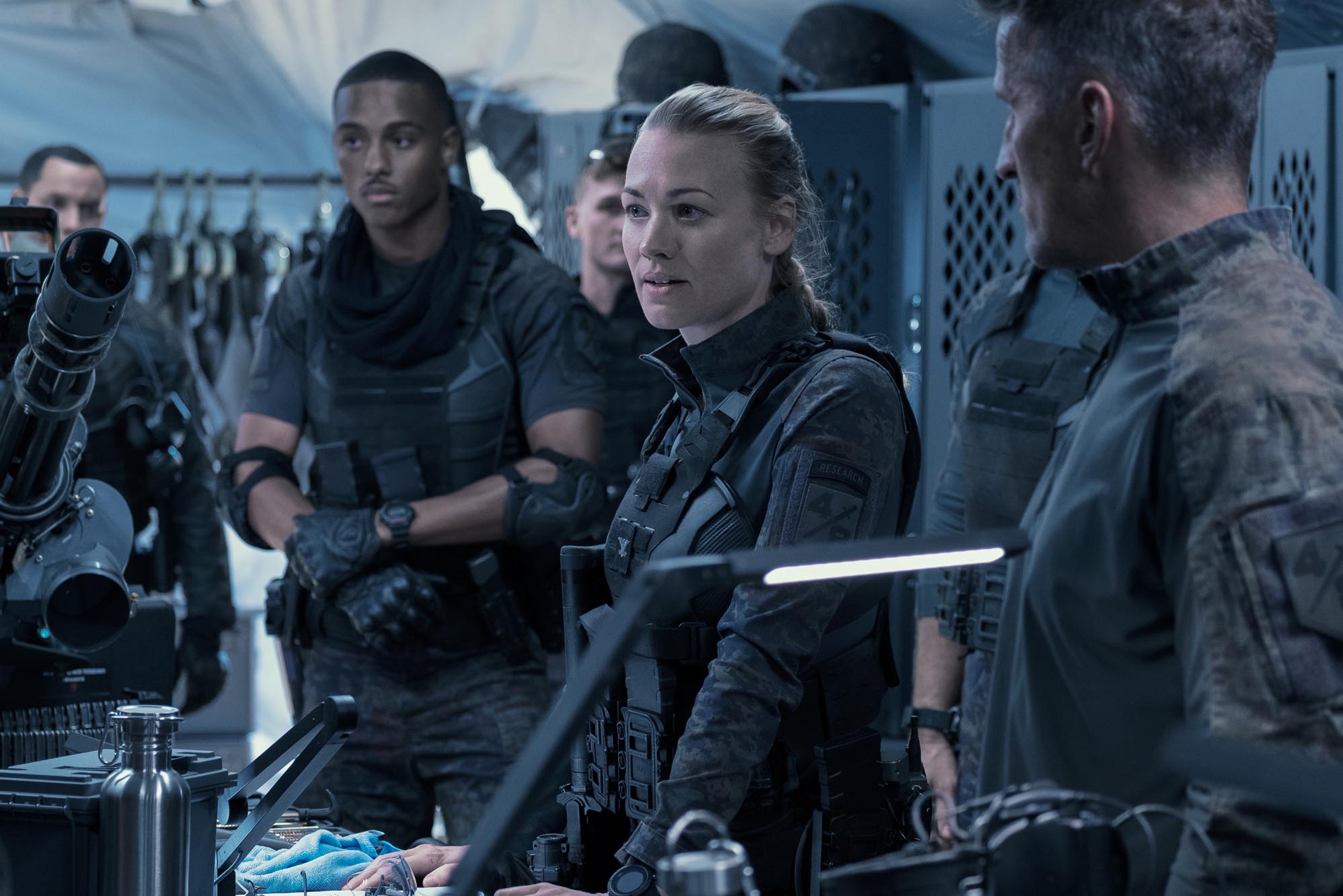 In The Tomorrow War, a December soccer match is interrupted by military personnel, beamed into midfield, who inform the television audience of a war. A war which has not yet started. Within a year of this announcement, leaders around the world agree to a worldwide military draft—civilians conscripted to jump into the future war and fight alongside their children’s generation to stop an alien force dead set on devouring the human race. Quickly, it becomes clear the humans are losing. Badly.

Dan Forester (Chris Pratt), a high school science teacher, is eventually drafted, grouped with a rag-tag (and mostly untrained) squad, and thrown into the fray. What follows is 100 minutes of bombastic, sonically-oppressive action. There are moments of respite from this onslaught. Scenes where Forester interacts with someone (in his future) from his past are a highlight. A slightly abrasive yet charismatic comic relief performance from Sam Richardson adds much needed levity to the self-seriousness.

Mostly, though, The Tomorrow War is a bloated, over-stimulating film. The heavy (and heavily conventional) score thuds under the weight of automatic gunfire, blinding muzzle flashes coloring the screen between bursts of flailing white tentacles. The visual design of the alien is vaguely compelling, and, again, it looks good in a ’90s sci-fi kind of way. But the action set pieces are loud and inert.

To be fair, the final act has its share of intriguing narrative wrinkles. Plus, the emotional payoffs function surprisingly well considering the characters are largely devoid of depth. Pratt and Yvonne Strahovski just make the script work where it counts. It’s also just not enough to salvage this thing.