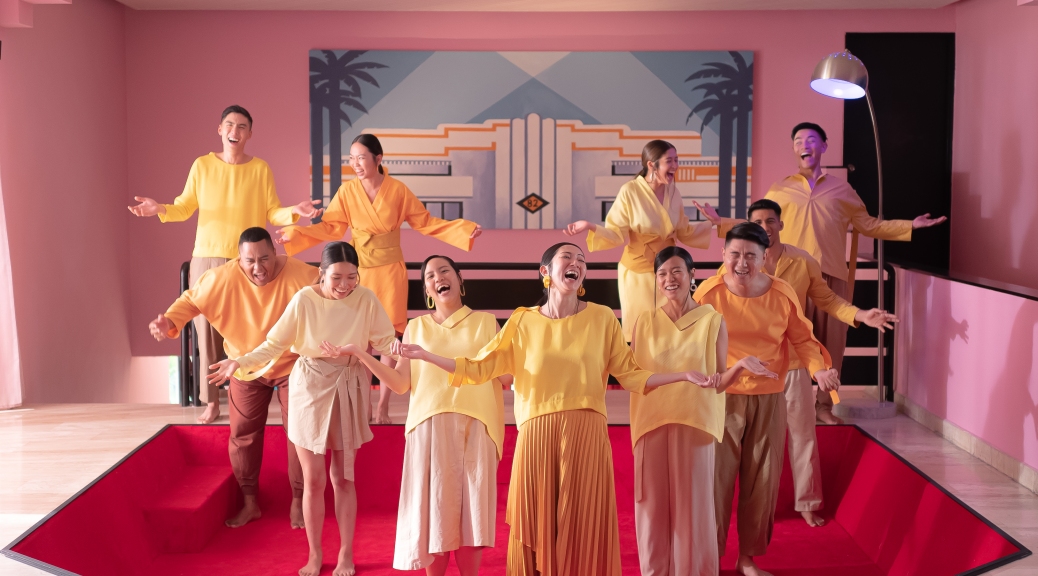 For his thirtieth birthday, the mother of Ah Bee (Thomas Pang) gifts him an invitation to the Tiong Bahru Social Club, a closed-off living community dedicated to providing and spreading happiness among its residents. “Everyone’s happiness is our business,” boasts the community’s advertisement. They are “the happiest neighborhood in the world.”

How do they accomplish this? They harvest data from their residents in order to control the flow of happiness, a statistic they can quantify as a percentage. A resident is not providing enough happiness to their neighbors or for themselves? Then they are removed from the community. The management assigns seemingly tedious jobs to residents in accordance to how the algorithm measures their projected happiness in those roles. Residents are paired up romantically through similarly data-driven models. And everyone smiles and waves in order to fit in.

Bee Thiam Tan’s Tiong Bahru Social Club is a sly yet heartfelt satire about the contemporary reliance on data-driven information, algorithms, and social media self-presentation. It is a genuinely funny film which embraces the tech-centric society it pokes fun at, as opposed to the general tact taken by these sorts of films to ridicule the technological dependence of our modern world. Instead of making a mockery of the archetype of a social media clout chaser presenting themself as the representation of perfection and happiness, it depicts a harsher yet more sympathetic reality that people often present themselves as more happy than they actually are.

Through this method of satirizing with empathy, the film evades many of the pitfalls often found in these light sci-fi exercises which try to say something about our technological world. For one, it allows its characters to come off as flawed human beings rather than simply cliches. It also leaves room for humor which is less focused on absurd exaggerations—though the exaggerations are humorous all the same.

The film also looks great. Symmetrical shot compositions show off aesthetically-pleasing, neon-tinted set design. The color palette may be, from a symbolic standpoint, fairly obvious, but there is a garishness to the pinks and yellows which adds to the comedic tone.

Occasionally, the script will put too fine a point on the intended themes, often in a voiceover narration that ultimately could have been excised. But there are many lines which are bluntly witty in a way which worked for me—one line about the old glass-half-full saying, delivered by a disembodied, Siri-like operating system which comes off like a more friendly version of the narrator from The Stanley Parable, is particularly humorous.

Tiong Bahru Social Club takes a clever and unique approach to its subject matter. It at once skewers the idea that algorithms can impact our comfort and happiness while also acknowledging that most people’s psychological makeup is, to some degree, dictated by our relationship to technology. Consistently funny and occasionally poignant, the film is a highlight of this year’s Fantasia Festival.

Tiong Bahru Social Club is screening as part of the 2021 Fantasia International Film Festival taking place from Aug. 5 to Aug. 25.