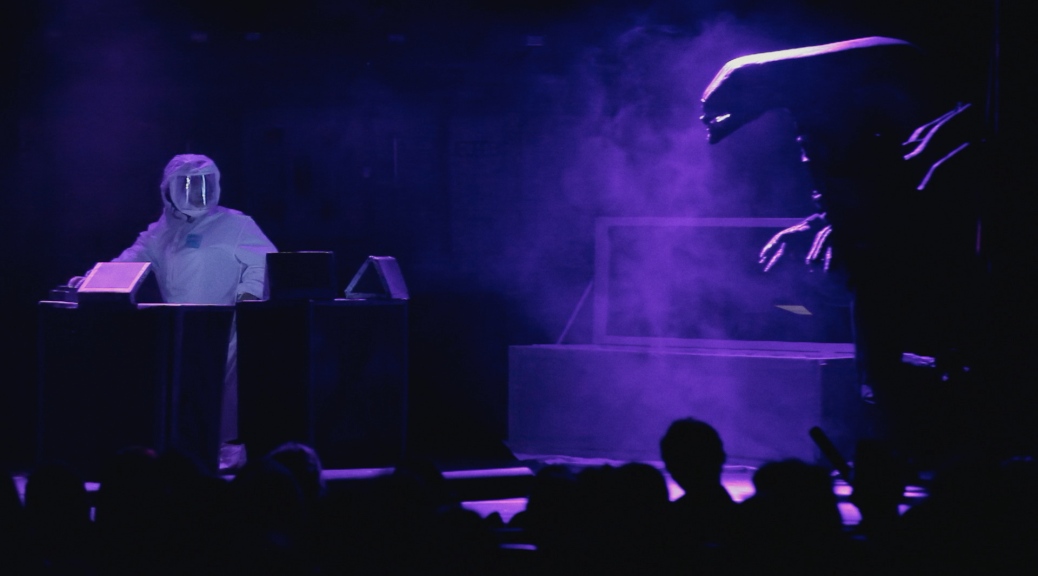 Alien on Stage and Frank & Zed are screening as part of the 2021 Fantasia International Film Festival that runs Aug. 5 to Aug. 25.

In Alien on Stage, Lucy Harvey and Danielle Kummer document the unlikely rise of an amateur theater troupe in Dorset whose stage adaptation of Ridley Scott’s Alien made its way from a sparsely-attended local production to a sold out crowd in London’s West End. The low-rent production, put on by a group primarily composed of bus drivers, is a humorous and loving tribute to Scott’s film, and the craft involved in putting the play together is commendable.

The film is more or less constructed into two parts. In the first part, the crew rehearses. We see the process of building the sets and the visual effects of the alien. It paints the full picture of this scrappy group pulling things together with a lot of heart and optimism. It also sets the stage for potential failure, with their opening night only selling around 20 tickets and actors struggling to remember their lines.

This leaves the fate of their West End debut—a one-night-only affair—up in the air. The mystery of how the show will go becomes a genuinely suspenseful question mark. And the film’s second part goes through the paces of the debut, starting with their arrival in West End, through setup and last-minute rehearsals, and finally the show itself.

It is perhaps not too much of a spoiler to say that the audience reception is overwhelmingly positive—it would be a tremendous let-down if the end result at the doc’s conclusion was a sad failure. Watching the audience react to the show is an exhilarating high point, an almost cathartic celebration of this theater group’s hard work and immense labor. And the filmmakers do a great job of capturing the live event onstage, backstage, and in the crowd.

Alien on Stage: B

Jesse Blanchard’s Frank & Zed is clearly a labor of love. Over the film’s closing credits there is a montage of behind the scenes moments with the small-scale crew joking around and having what appears to be a lovely time making this bloody puppet creation. One hopes it was a fun experience, given that it took six years for the film to be made and find its way to festival exhibition.

And this time-consuming process is certainly what gives the film its charming aesthetic. Frank & Zed is clearly an intricately-crafted project—the attention to detail is evident from the establishing shots to the insert shots. The sets and backdrops look great, and there is a tactile quality to the props and set design which gives the film a lot of life (a pretty important quality to display when your film is made up entirely of literally lifeless objects).

I am not a particular fan of adult-oriented puppet content (of which there is a surprising amount). The most well-known feature films in this niche subgenre, Meet the Feebles and The Happytime Murders, are, in my opinion, quite bad. So perhaps I am not the target demographic for Frank & Zed, but I can at least say confidently that this is significantly better than either aforementioned film. From a production value standpoint, it is superior to Feebles. From a story and humor standpoint, it is superior to Happytime (although, the story and humor are both sticking points for me with Zed, as well). The craft on display in Frank & Zed is simply better, and, to the right viewer, this will be a massive delight.