In the New York Post review of Darren Aronofsky’s new feature film Mother!, critic Sara Stewart calls the film “a Rorschach test of a movie to interpret however you like.” Not only is this statement accurate, but it is the fatal flaw that sinks this unwieldy monster of a film. 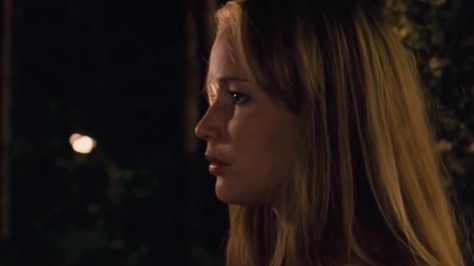 Should I be viewing this film with a feminist lens? Is it about the oppression of women in modern society? Why then does the production and costume design of the film make it feel like it is coming out of a colonial period piece?

Or is it really a theological lens that I should be undertaking? Is Javier Bardem’s quizzically-named “Him” really a depiction of a prideful, humanly-flawed God? It is ambitious then that Aronofsky decides to illustrate the downfall of Western civilization inside the confines of a single house. But then who (or what) is Jennifer Lawrence’s “Mother.” The Virgin Mary? Mother Nature herself? What, then, does the cyclical nature of things have to do with her? Where does the baby fit in? Jesus? Sure, maybe, unless Mother is Mother Nature. The human race? I guess, but then who are all of the other characters in the film?

Is Mother! just a rage-filled response to the current state of affairs in the Western world? There’s enough blatant imagery in the film to pull a thesis out of that idea, even if that imagery is mostly just a blur in front of the screen that has no real relevance to the narrative. But why does Aronofsky even bother with the first two-thirds of the film if his goal is to present an apocalyptic representation of the world through disparate, fleeting images of cruelty and destruction?

Mother! is a film about a woman (Lawrence) who lives in isolation with her husband (Bardem) and wants to build up the house from the literal burned ashes of its predecessor. When some strange figures start appearing at their doorstep, the husband lets them in with open arms, even though they seem to do nothing but harm.

A challenging movie is always a welcoming sign. A movie that forces a conversation is even more welcoming. But a film that complicates its own message with metaphors and expressionist imagery that seems stuck in the rut of its own existence within the narrative makes the conversation less helpful.

The critical take on this film has already made this claim, that people will leave the film with drastically different interpretations. Whatever Aronofsky wants audiences to discuss about the film, it will not come to pass, because nobody will see the film like Aronofsky did.

The term “pretension” has been thrown around about Aronofsky and Mother!. It is hard to agree with this. Mother! is, undoubtedly, a personal film for Aronofsky. That said, the whirlwind that he puts on screen does not amount to much of anything. The film is not pretentious, but it also is not substantive.

Putting aside the limp narrative, and the exploitation turn the film takes in the final 40 minutes, and the heavy-handed imagery, and the absence of subtlety in its pursuit of cruelty, Mother! has technical flourishes that are exquisite.

Aronofsky’s auteur stamp is all over the film. DP Matthew Libatique succeeds in creating an abode that is at times claustrophobic and at times isolating in its massiveness. Lawrence is almost always framed in a queasy medium closeup, following her as she ducks in and out of rooms and hallways in this mansion of a house.

This disquieting camera work is accompanied by fantastic sound design. Every clink and shuffle is captured in a heightened state, and these mundane sounds become all the more heightened at certain moments of unease for Lawrence’s character.

Lawrence and Bardem also provide commanding performances that ground this film as far as they possibly can. Michelle Pfeiffer and Ed Harris, too, add a tense element to the early (and better) half of the film. Their exit, in a way, signals the hinges falling away.

Mother!, to put it most simply, opens as a psychological thriller, middles as a farce, and closes as an exploitation film, all wrapped up with an epilogue that tries to make the whole thing appear retroactively as an art film.

But call it tiresome, and I’ll buy you a beer. You’ve earned it.