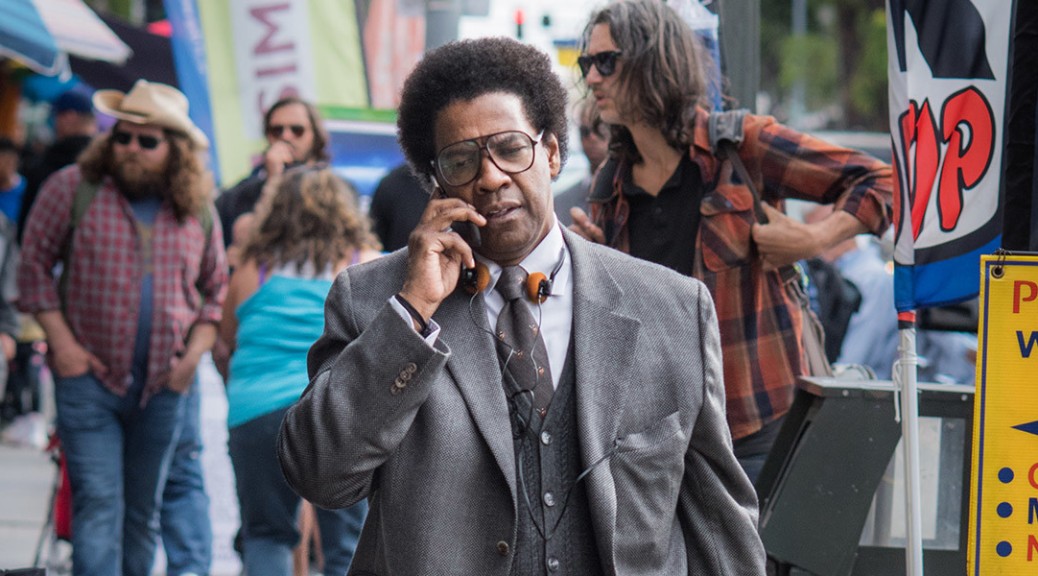 It wouldn’t be surprising if you only know of the film Roman J. Israel, Esq. because the poster features the back of Denzel Washington’s head. It’s understandable. It’s not as if the name is particularly catchy. But Roman J. Israel, Esq. is the second directorial feature from Dan Gilroy, the man behind Nightcrawler and the scripts of such films as The Fall and Bourne Legacy.

For someone who appreciated Nightcrawler, it is not unreasonable to anticipate good things from Gilroy’s follow up. Don’t be fooled. Roman J. Israel, Esq.—and I only keep reiterating the name because we are reminded of it time and time again in the film—is not the same beast as Nightcrawler. In part a character study with threads of judgment and guilt and in part a paranoid legal thriller, Gilroy’s latest is a film of two almost dissociated minds.

When the film wants to be a thriller, keeping us on our toes about what could be in store for our hero (the aforementioned Roman J. Israel, Esq., played by Washington), the idiosyncratic criminal defense attorney is blinded by crippling paranoia. He looks in rearview mirrors and over his shoulder as if he is being hunted. When the film wants to be a dramatic meditation about what it means to have guilt (and, thus, be human), Israel grows monastic, calmly reciting tenets of wisdom as if they were memorized case law.

Either side on its own could be done in compelling ways. We see evidence of a quality thriller underneath this film in Gilroy’s staging (we also see a high-quality thriller in Nightcrawler, which does not sacrifice intensity by adding immense depth to its lead character). There is a scene involving a tense conversation between two characters walking down the street, where the curious continuity in the background of the frame becomes more and more ominous with every cut.

This is engaging visual material, but it is used to set up a narrative turn that feels out of place in the film. If anything, the moment undercuts what could be a meaningful resolution to a character’s story.

When the film is a character study of Israel, who is a savant attorney with a handful of obvious tics, we are gifted with the consistency of Washington’s acting ability. To borrow a term from a popular podcast, the role does not have the same level of Denzelishness as other Washington characters. Israel is a soft-spoken, bumbling man with more of an internal presence than an external personality. Still, Washington takes over the film, owning the role and granting us access into this otherwise imbalanced film.

The first half of the film introduces some fascinating thought processes from Israel. When his intriguing view of humanity and absolution is adopted as a “personal approach” marketing tactic by the big law firm that hires Israel when his partner suffers a heart attack, these fascinating morsels get complicated in even more intriguing ways.

When the film abandons this thematic meditation in lieu of its crime thriller subplot, everything starts to unravel. While there are still moments of visual intrigue during this stretch, the film never picks up its feet to deliver a rousing climax. It attempts to wrap it all back up into the crux of Israel’s philosophy, but it does so by dragging the remnants of that first half across the finish line.