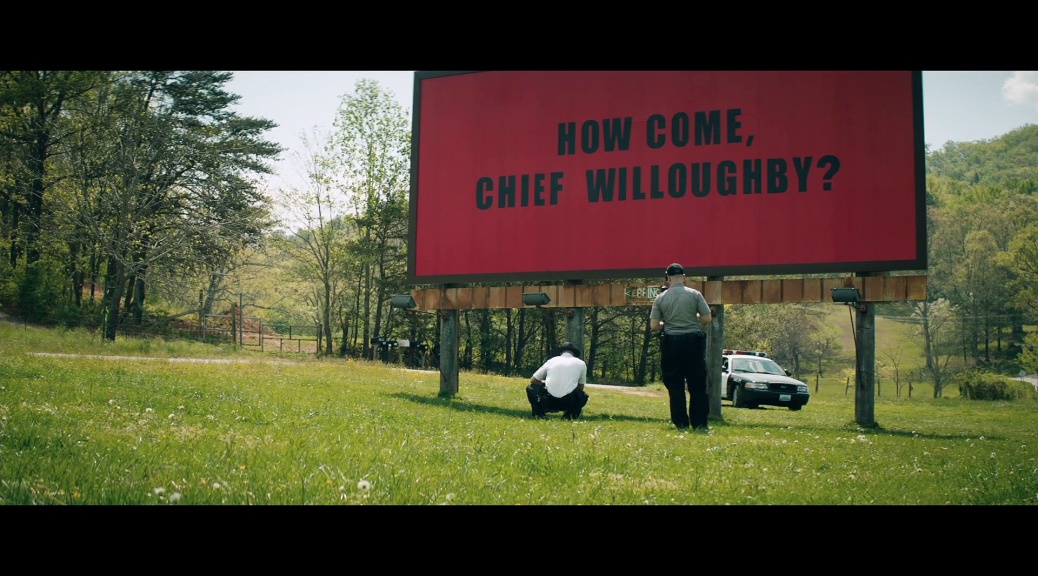 In Three Billboards Outside Ebbing, Missouri, a title so laborious and specific that it can’t help but get stuck in your head, Mildred Hayes (Frances McDormand) rents out three billboards (they haven’t been used in years, not since the highway went up) and plasters a notice up on them. Black on red. A question aimed at Police Chief Willoughby (Woody Harrelson) asking for justice for Mildred’s dead daughter.

A confrontational pitch-black comedy about reactionary culture and life-altering emotional extremity, Three Billboards delivers one of the sublime tonal experiences of the year. The film’s characters at the absolute height of their emotional thresholds, the action veers wildly from dark comedy to gritty thriller to striking drama, all without coming off choppy or jarring.

Martin McDonagh’s script weaves its tale through characters whose cruel senses of humor are topped only by their bitter resentment, their wildly unpredictable actions constantly threatening to be life-changing. McDonagh deftly handles these whiplash-inducing shifts in tone, threading the needle while keeping our eyes glued to the screen.

The deliberate nature by which certain scenes play out cause one to anticipate potential outcomes, the knife turning in the wound slowly. While these outcomes are at times easily-spotted, most scenes are electrifying because it is hard to know exactly what characters will do. A sequence in a bar and a sequence in a restaurant—the two occurring close together to make for a pulse-pounding act—both play out with an excellency of pacing that is rare to see.

The film may fall out of the good graces of some audiences for its crass characters and outbursts of aggression, but these outwardly jagged pieces are merely tools McDonagh uses to subvert character conventions and surprise us again and again with characters who have depth and heart in initially unlikely places.

McDormand dominates the screen with a presence that is unshakable, her character’s go-for-broke passion to achieve closure the driving factor that keeps the film churning (delightfully). She carries her bitter matriarch character with a stony exterior that is beautifully unflappable. Still, the heavy and dire nature of her concerns are never abandoned in this repression of grief. It remains partially-hidden behind her fiery eyes, this dam of emotional density that weighs on her in spite of her valiant resistance.

As much as the film is McDormand’s, for which an Oscar feels necessary, the supporting cast behind her is top notch. One of the film’s only shortcomings is not providing resolution to some of these supporting character’s arcs, as in the cases of Peter Dinklage’s smitten James and Lucas Hedges’ Robbie. But the acting, even in these incomplete roles, is attention-grabbing.

Sam Rockwell, playing an allegedly racist and definitely dim-witted police officer, carries whatever scenes don’t feature McDormand. He brings depth to a character that would be a villain archetype in any other movie. That the film teaches us to dislike him and then convinces us otherwise feels like a screenwriting exercise, but it plays out like a magic trick.

Three Billboards Outside Ebbing, Missouri, like McDonagh’s other films, is not internally refined. The characters face flaws in inappropriate ways and often with brute force. But McDonagh imbues the film with a surprising amount of heart. That his characters are crass and distinctly human makes these moments of heart brilliant kernels of understanding as opposed to transparently sentimental. Three Billboards will surprise you, if only because there is more going on here than it initially appears.

Three Billboards outside Ebbing, Missouri: A