The cold open to M. Night Shyamalan’s new venture, Split, features an intriguing mix of directorial choices. There is a Hitchcockian motivated mobile POV, one that starts as an innocent track. There are motivated pans and tilts that follow our protagonist Casey’s (Anya Taylor-Joy) increasingly cautious gazes. There is a sense of impending dread with each edit. 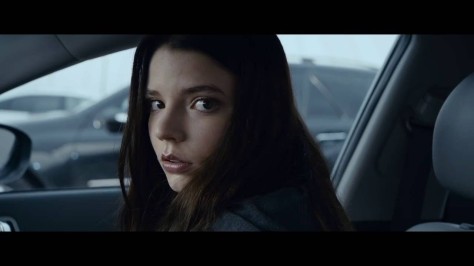 This opening kidnapping was shown in almost its entirety in Split‘s trailer, which presents the premise of a man with multiple personalities (James McAvoy) who steals away three teenage girls (Haley Lu Richardson, Jessica Sula, and Taylor-Joy). Ignore the ridiculous notion that a multiple personality sufferer can alter his or her body chemistry with thoughts, and it is a buyable premise.

Shyamalan’s modus operandi for this film, in terms of the camera, is tightness and `perspective. It is not a novel approach in the thriller/horror genre, but he does well with his camera choices. We get plenty of rack focuses, closeups, and standard horror POV shots.

The formulaic similarities between Split and last year’s 10 Cloverfield Lane are unavoidable given proximity, but Split differentiates itself with McAvoy’s movie-stealing performance. Not only does he wear multiple hats, but he gives personality to the otherwise one-dimensional characters inside Kevin’s head. His various ticks and mannerisms transition seamlessly from identity to identity. Even if it can get cartoonish at times, his performance is something to behold.

Shyamalan often works in a Hitchcock framework. Only, in previous films the Hitchcock Macguffin is often replaced by bad twists. In the case of this film, the lack of a standard twist is helpful, even if it leaves the ending noticeably lacking in climax.

Other Hitchcock tropes—suspense, set pieces, macabre humor—Shyamalan does not do nearly as seamlessly, but here they accumulate into something thoroughly entertaining. The suspense bites often, if perhaps not amplified enough. The macabre humor, at times, is superb (note a scene in which one of the prisoners attempts to open a lock with a hanger). The set pieces are limited by environment, but there are few scattered within the 2-hour film that command attention.

Something about the end of the film rubs me the wrong way. It is the equivalent of a post-credits sting a la Marvel (and I guess it the closest thing to a twist in the film). Will this be the start of the M. Night Shyamalan Cinematic Universe (they could even call it the MCU. Oh, wait…)